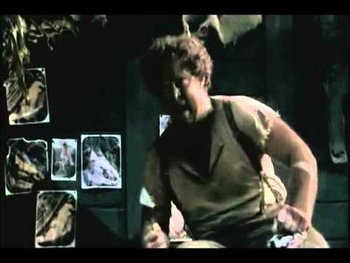 I ain't gonna dream about her arms no more!
I ain't gonna leave her alone!
Goin' outside
Git myself a bride
Git me a womern to call
My own!
"This is one of those love songs that crosses that narrow divide between 'romantic' and 'deeply disturbing.' You know, the difference between 'I always want to be with you' and 'I want to wear your skin like a sweater."
— Kingdom of Loathing
Advertisement:

The Obsession Song is like a love song written by a Stalker with a Crush or a Yandere. Most examples simply involve obsessive love with heavy overtones of stalking and possessiveness, but some take it to such extreme lengths that it sounds like the singer is planning on raping you, killing you, and keeping your corpse under their bed.

The Obsession Song falls into two basic varieties, although many have elements of both:

Many Obsession Songs are mistaken for love songs, especially when they have Lyrical Dissonance, and sometimes even end up being played at weddings. Conversely, some love songs with nothing but innocent intentions can unintentionally end up as Obsession Songs.

Needless to say, this trope can be a potent source of Paranoia Fuel.

And this is before the Scare Chord punctuated chorus, which changes to a blatant, direct demand to be loved, or his life will be ruined.

Gabi's villain song Poisonous Love is this where she sings about her obsessive love for Nigel and it is very creepy...

Gabi's villain song Poisonous Love is this where she sings about her obsessive love for Nigel and it is very creepy...