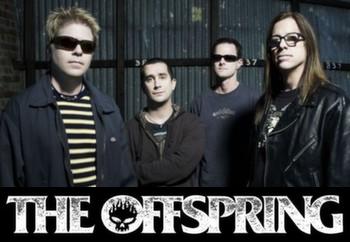 Now I know I'm being used,
That's okay, man, 'cause I like the abuse,
I know she's playing with me,
That's okay 'cause I got no self esteem.
— "Self Esteem"
Advertisement:

The Offspring is a popular Punk Rock band from Orange County, California. They formed in 1984 and released their first album, self-titled, in 1989. They have made nine albums in total. Credited along with Green Day and a few others with helping to bring punk rock into the mainstream. Their first two albums were indie punk and not very popular, but that all changed soon. Their 1994 album Smash was their biggest commercial success and remains the highest-selling album ever released on an independent label, having sold over 16 million copies.

Their mostly punk music contains elements of pop, grunge, metal and ska. Lyrical topics are very wide-ranging; one of their most famous songs, "Self Esteem", is about a personal relationship involving an Extreme Doormat Love Martyr, but they also released a concept album dedicated to the degradation of America, for example.

The band's constant members from 1985 to 2018 have been Bryan "Dexter" Holland (vocals, guitar), Kevin "Noodles" Wasserman (guitar, backing vocals, Nerd Glasses) and Gregory "Greg K." Kriesel (bass, backing vocals). Their best-known drummer was Ron Welty, who was in the band from 1987 to 2003. Afterwards they cycled through a few extra drummers (Josh Freese, Atom Willard of Rocket from the Crypt and Angels & Airwaves) before settling on Pete Parada (formerly of Saves the Day and Face to Face), who has been in the band since 2007. Amusingly, Wasserman was the janitor at Holland and Kriesel's high school, and he was initially brought into the band because he was 21 years old and could buy everybody else beer.

In 2018, Holland and Noodles allegedly decided to ban Greg K. from the band, causing him to file a lawsuit against them. He is now replaced by Todd Morse, while drummer Pete Parada was dismissed from the band in 2021 due to his refusal to take the COVID-19 vaccine on his doctor's orders with Josh Freese replacing him for their 2021-22 tour.

Come Out and Trope:

Hey, that's something everyone can enjoy!