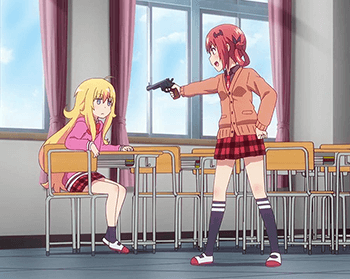 "Some of you angels are alright. Don't come to school tomorrow."
"And you can all hide behind your desks now!
And you can cry, 'teacher come help me'!
Through you all, my aim is true!"
— The Offspring, "Hammerhead"
Advertisement:

Has nothing to do with Cartesian Geometry.

A student brings a weapon to school. They may not necessarily use it against anybody, but even then you can expect somebody's parents to panic about what could have happened. This plot will rarely last longer than a single Very Special Episode and can focus on the incident, the following consequences, or a mix of each.

Outside of characters designed to be antagonists, the person who brings the weapon is rarely a member of the core cast, since that would force the writers to either justify it in the audience's mind and/or come up with some way for them to get off scot-free. Unnamed background characters who attempt this are fair game for being caught and sent off to juvie, though. If they are a main character, expect for them to be gone from the show for a long time.

Unfortunately, this can also be

Truth in Television, as school shooting tragedies such as Columbine have proven — otherwise, schools wouldn't have metal detectors and X-ray scanners, and teachers wouldn't be issued Kevlar vests and, in some US states, allowed to bring guns of their own. Of course, the real life portion of this is Older Than They Think; the Columbine incident in 1999 was simply one of a handful of shootings that earned national attention. In his book Brain Droppings, George Carlin refers to schoolyard deaths back in his childhood.