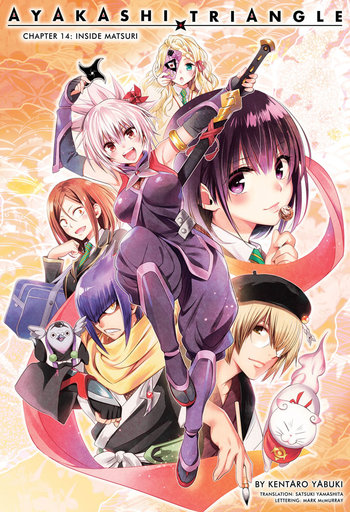 Ayakashi Triangle (あやかしトライアングル) is a manga by Kentaro Yabuki that began running in Weekly Shonen Jump in June 2020 and moved to Jump+ in April 2022.

Matsuri Kazamaki and Suzu Kanade are a teenage boy and girl who grew up close together because of their shared ability to see ayakashi, spirits that are invisible to most people. Suzu is an "ayakashi medium" whose spiritual power attracts ayakashi for good and ill. Learning this years ago inspired Matsuri to follow his family tradition and become an exorcist ninja who could protect her and others from dangerous ayakashi.

The day before the two were to start high school, Shirogane, the King of Ayakashi, reveals Suzu's nature to her and attempts to eat her to take her power for his own. Matsuri is able to seal away his power before that happens, but not before Shirogane casts a spell that turns Matsuri female.

With no way to reverse the spell, Matsuri is forced to live publicly as a girl for the foreseeable future. Together, he and Suzu try to find some way to get the heavily-weakened Shirogane to reverse the transformation, all the while dealing with other ayakashi and Suzu's growing power.

Ayakashi Triangle marks Yabuki's return to Weekly Shonen Jump after the original run of To Love Ru ended in 2009, and the first time he has written and drawn a series since Black Cat wrapped up in 2004. It is based on Reo × Leo (れお×レオ), a six-page oneshot by the same author, which was published in Jump as part of "J Romcom Festival!" for Valentine's Day 2019.

Chapters are officially released in English the same day they are published in Japan, on Manga Plus

(website and app). The chapters from the Weekly Shonen Jump run are available on Viz Media's website

(though not the Shonen Jump app). Manga Plus also has simultaneous release of chapters in Spanish

. The Japanese publication moved from Shonen Jump to the digital app Shonen Jump + in Spring 2022. As with its sister series, Seven Seas Entertainment has picked the English license for an uncut physical (and digital) release of the collected volumes.

. Other details are to be determined.