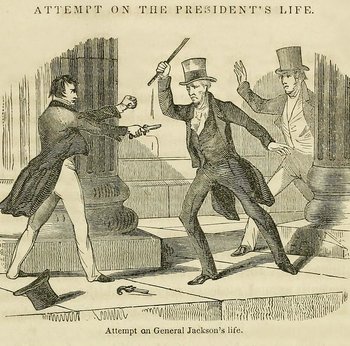 Also pictured: Attempt on the president's assassin's life.
"Some men are coming to kill us. We're gonna kill them first."
— James Bond, Skyfall

Someone is attempting to assassinate someone. But the target refuses to be assassinated, either because of luck, a talent to survive, special skills, or a skilled bodyguard.

The assassin may be killed by his target, have poisoned himself before the mission, commit suicide, be executed by his leader or organisation (or alternatively have other assassins sent after him, which sometimes causes him to outclass these in turn) or by the person who contracted him (which was probably going to happen anyway), or join the "outclasser".

Sometimes, this is a Running Gag. In many cases, that situation leads to a Moment of Awesome or "Who's Laughing Now?" for the assassin's target, but sometimes it can horribly fail, when the lucky streak breaks and the target cannot defend themselves sufficiently anymore, either because of further, much more skilled assassins that were sent or because the target became overly self-confident and careless after outclassing various assassins.

Killing an Assassin Outclasser usually is a Moment of Awesome for the assassin. It will often be a Rasputinian Death since these people are... not easy to kill. Conversely, if the assassin is established as badass only to reveal their target as that much more badass, that's The Worf Effect.

If the assassin refuses to finish the job instead of failing or is verbally convinced by the victim to leave them alone, see Hitman with a Heart.

Suyin and her twin sons sneak their way into Kuvira's camp to kill The Great Uniter in her sleep, only to be captured by Kuvira instead.

Suyin and her twin sons sneak their way into Kuvira's camp to kill The Great Uniter in her sleep, only to be captured by Kuvira instead.