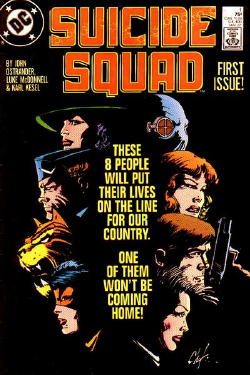 "Always did want to die for my country."
A team of expendable and deniable criminals and damaged heroes in The DCU who are sent on secret missions for the US government expected to have a very high mortality rate.
Advertisement:

The first Suicide Squad printed was a try-out feature in The Brave and the Bold, starting in #25 (August-September, 1959) and appearing on and off up to #39 (December, 1961-January, 1962). They were a quartet of non-powered adventurers who fought monstrous menaces, as was common in the 1950s. Despite the name, none of them actually died in the original stories. In fact, in concept they were closer to Jack Kirby's Challengers of the Unknown.

There was also a World War II team called the Suicide Squad, or possibly two of them. One was a feature in Star-Spangled War Stories from 1963-1966 fighting "The War That Time Forgot"; it was a top secret Ranger outfit trained to handle missions ordinary volunteers would not survive. The other was a Dirty Dozen-style collection of military riff-raff and criminals assembled to handle Suicide Missions. It was retconned into existence to provide a through line from the World War Two version, through the Fifties version to the new Suicide Squad debuting in the 1980s.

The modern version debuted in Legends #3 (January, 1987). In that Crisis Crossover event, Darkseid had manipulated events such that superheroes were unable to operate in public. So when the nuclear menace Brimstone appeared, the job of stopping it was handed over to Task Force X, a secret government agency dedicated to handling paranormal menaces that had languished since the beginning of the modern superhero boom. The agency deployed their newly created "Suicide Squad" team, which succeeded in destroying Brimstone, at the cost of the first Blockbuster's life.

The team was then spun off into their own series, Suicide Squad, starting in May, 1987 and was written by John Ostrander. The premise was that of a covert ops team that would handle situations too shady or bloody for the government to call regular superheroes in on. Most of the operatives were costumed criminals who served in exchange for reduced jail terms, shepherded by a few dark or damaged heroes. For easy access to their personnel, the team operated out of Belle Reve prison in Louisiana.

The head of the Suicide Squad was a character almost unique in super-hero comics, Amanda Waller. She was a middle-aged, full-figured black woman who'd clawed her way out of poverty to become a well-respected political operative. Ms. Waller was also a rare female Magnificent Bastard who would stop at nothing to act in the interests of the United States as she saw them. (Later appearances in other series have tended to leave off the "magnificent" part.)

The field leader for the first part of the series was Rick Flag, Jr. A Badass Normal special forces officer, he was (supposedly) the Sole Survivor of the previous Suicide Squad incarnation. Ultimately got killed off and replaced by his second in command Bronze Tiger, a martial artist who'd become The Atoner after serving the League of Assassins while Brainwashed and Crazy.

Eventually, the Suicide Squad's existence was revealed to the public and later the operation was shut down and Amanda Waller sent to prison for crimes committed while head of the team. She was later offered a pardon in exchange for performing services for the government (the poetic justice of this did not escape anyone) and the Suicide Squad was reformed as a private contractor, though still with the ability to recruit convicted criminals as needed. The series ended with issue #66 (June, 1992).

There were various incarnations of the Squad appearing in other titles for a few years, then a new Suicide Squad series began in 2001. Written by Keith Giffen, this version was headed by Frank ("Sergeant") Rock, and lasted only twelve issues. The series ended on the cliffhanger that Rock may have been an impostor, and leaving open the question of just who that version of the Squad had actually worked for.

The Squad was subsequently reformed under Amanda Waller's leadership, appearing in 52, Checkmate and the limited series Suicide Squad: Raise the Flag, which brought back Rick Flagg Jr. as a brainwashed pawn of General Eiling.

A new series launched in 2011 as part of the line-wide revamp of The DCU. The series, initially written by Adam Glass and drawn by Marco Rudy, starred redesigned versions of Deadshot, Harley Quinn, and King Shark, among others, and ran for 30 issues plus an issue #0. It was relaunched almost immediately as New Suicide Squad, with Sean Ryan as initial writer, lasting 22 issues plus a Futures End tie-in. It then got relaunched again as part of DC Rebirth in 2016, returning to simply Suicide Squad, with Rob Williams as writer. The series also saw numerous spinoff one-shots and limited series.

The DC Suicide Squad has appeared in other media:

Not related to Monty Python's Life of Brian's Seppuku squad.