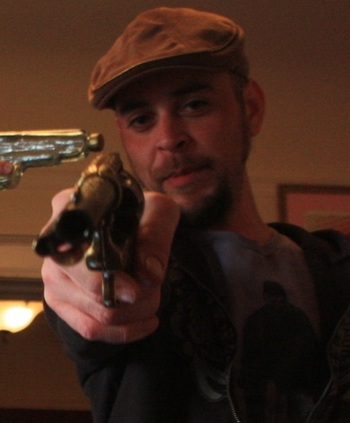 Michael Kirkbride is about to shoot you.
Michael Kirkbride (born September 1, 1972) is a writer and video game designer, most famous for his time with Bethesda working on The Elder Scrolls series.
Advertisement:

Kirkbride wrote for both Morrowind and Oblivion, as well as for the Action-Adventure spin-off Redguard. In addition, Kirkbride wrote dozens of the series' in-universe books.

Kirkbride is credited in particular for establishing the series' famous "lore", essentially taking the loose assembly of fantasy elements that existed as of Daggerfall and forming them into a unique Constructed World with a deep backstory, mythology, and cosmology. He still contributes "Obscure Texts" to the series, essentially supplementary items treated as canonical by a portion of the fanbase (or at least the equivalent of the series' famous in-universe Unreliable Canon). Kirkbride still does some freelance work on the series, and as of Skyrim, some of the concepts in his works have been officially referenced in-game (the idea of "kalpas", Ysgramor and his 500 companions, and some of the motivations of the Thalmor), moving them to Canon Immigrant status.