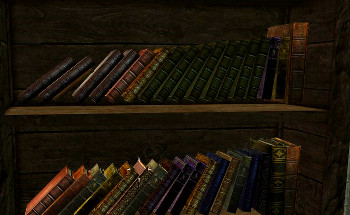 For whenever you get tired of adventure.
Advertisement:

Tropes that apply to any Show Within a Show in The Elder Scrolls verse. Some are pure fiction, others tales based around historical events, while a select few are historical documents. Some people mentioned actually exist in one or more of the games, often as high-level skill trainers.

All texts can be found at The Imperial Library

fansite, as well as at The Unofficial Elder Scrolls Pages

. There's even a smartphone app containing them.

And yes, there are so goddamned many of them that they warrant their own. Just look at that list.