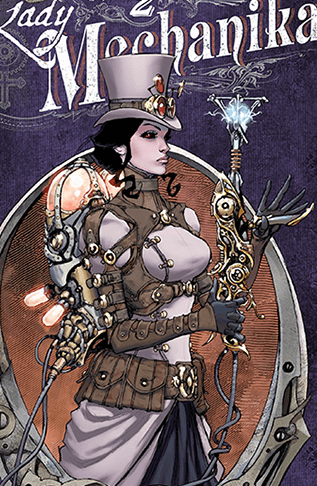 "Imagine it... The Victorian Age accelerated. Starships and missiles fueled by coal and driven by steam. Leaving history devastated in its wake."
— The Doctor, Doctor Who, "Tooth and Claw"
Advertisement:

It is a retro-style Speculative Fiction set in periods where steam power is king. Very often this will be in an Alternate Universe where the internal combustion engine never displaced the steam engine, and as a result, all manner of cool steam-driven technologies have emerged, ranging from Airships to submarines; the plausible counterpart to magitek, with a Hollywood Science Hand Wave or The Spark of Genius. Largely, steampunk runs on Rule of Cool, with some supposedly "steam-powered" technology being more advanced than modern electronics. Sometimes combined with the work of Charles Babbage on mechanical computers to produce a kind of retro cyberpunk set entirely in the Victorian era or a close analogue, with Dickensian exploitation. In essence, it's applying the question of "What if the future happened sooner?"

Steampunk may be a modern reflection of the 1930s–40s trope of The Gay '90s, an idealized version of the 1890s. While various works may be more chronologically specific, any time from around 1860, through to the 1910s, can be considered fair game. Think of The American Civil War and World War I as acceptable bookends: the former is when the technological revolution really started to take off, and the latter when it first started edging into Diesel Punk. (Some definitions set the start date earlier, though, perhaps as far back as the 1780s, when the Industrial Revolution first began to take off.) The term "steampunk" was coined by K. W. Jeter to describe the speculative fiction stories in a Victorian setting that he, Tim Powers, and James P. Blaylock were writing in the early 1980s in contrast to the cyberpunk stories like Neuromancer that were saturating media. Steampunk's modern incarnation may be considered a reaction to the popular dystopias of that time: the positive power of the imagination and subversion of the New Technology is Evil trope are common steampunk themes, although recent steampunk is increasingly likely to deal with dystopian societies, sometimes even drawing upon the works of Charles Babbage to theorize humans with mechanical brains and other things rendering them cyberpunk in all but the backdrop and visual trappings.

Elements of steampunk that are set in the American frontier are usually referred to as "cattlepunk". Some writers and fans refer to the "shiny happy" version as "Victorian Fantasy", "Gaslamp Fantasy" or "Victorian Futurism". Supernatural or paranormal tropes are more frequently included in this approach, in which case the Encyclopedia of Fantasy favors "Gaslight Romance".

. Another good example of the Lovecraftian/antediluvian influence on steampunk would be the design of the Nautilus, Captain Nemo's submarine, in the film adaptation of The League of Extraordinary Gentlemen. Expect to also see a strong, visible Irish influence, in terms of such features as stained wood, brass, and American frontier-style blown glass oil lamps. You will occasionally encounter some minor overlap with the post-Victorian Art Deco movement as well, particularly in terms of typography. The Zeppelin or rigid airship could also be considered one of the major icons of steampunk, due to the major public enthusiasm for the craft pre-1937. This is despite them being much more commonplace in the Diesel Punk era. To be fair, though, the first airship flew in 1852, predating both the Lincoln Administration and radio- and yes, it was powered by a steam engine.

Jules Verne, the first Speculative Fiction writer, is the king of this trope. He and H. G. Wells are often mentioned as the foundation of a literary steampunk's reading list. For added style, however, knowledge of the New Thought

movement can help, as can Spiritualism

, as both of those were very popular among the Victorians, and very influential on their thinking. In addition to being a science fiction writer, Jules Verne was also a Naturalist

, as exemplified by Verne and others such as William Beebe

, is one of steampunk's most important subtropes.

If instead of industrial era technology, the setting has pre-industrial technology, see Clock Punk, and if it includes internal combustion engines in place of steam, see Diesel Punk, though there can be crossover between them if used purely aesthetically. If the steampunk results from Applied Phlebotinum, see Phlebotinum-Induced Steampunk. Many examples of steampunk mix in a few mutated monsters (probably in homage to Charles Darwin living roughly in the era depicted), thereby bordering upon Bio Punk. If it assumes the truth of Victorian-era science, it may also become an example of All Theories Are True. Visual media (and the real life steampunk subculture) will never miss a chance to showcase some seriously Awesome Anachronistic Apparel, and for fanservice's sake a woman in a corset must be involved at some point. As might be expected, steampunk fashion/costuming has a certain amount of overlap with the Gothic subculture, although the Goth look tends to be somewhat darker, and not as heavily focused on machinery as such.note “Steampunk is what happens when goths discover brown.” — Jess Nevins

Of course, the differences in values between the Victorian era and the present are rarely mentioned, unless the work is emphasizing the "punk" side of things more than most of them do, or consciously attempting deconstruction. This leads to occasional criticisms that steampunks are glamorizing the racist, imperialist culture of the Victorian era — though some of them can and will argue with that.

However, any Victorian-era society which actually tried to create steampunk technology would soon find itself in stark trouble. Barring magical intervention, the power requirements necessary to make real-world versions of steampunk devices (or at least Victorian-era versions of 20th century technology) would be enormous, and would soon exhaust all available supplies of coal and wood. A real steampunk society would have to either immediately transform into a fully modern society (with oil, gas, and nuclear power driving devices made of modern, lighter materials) or would quickly become, in all probability, a technological dead end. With this said, the recent development of a number of designs of rocket stoves

beginning in the 1980s, have demonstrated that a highly fuel efficient steam boiler may in fact not be quite so impractical after all, at least on a small scale. On this point, it is also worth mentioning that the average contemporary power station still runs primarily on large coal-fired steam turbines, and that nuclear power still actually involves running a steam turbine as well, but simply uses the heat from (ideally) contained nuclear reactions to generate steam, rather than a wood or coal-fed fire.

To a large extent, it seems that the fantasy genre is quickly moving away from traditional medieval Heroic Fantasy settings and more towards settings inspired by steampunk. Some modern fantasy authors even combine the two.

Compare Cyberpunk, which has some similarities with steampunk, Tesla Tech Timeline, the result of moving one step further up the industrial scale, past the steam and gears and into steel and electricity, and Raygun Gothic, the aesthetic of SF from the immediate post-steam era. Compare also Low Culture, High Tech, especially if the story takes place in a real-life historical period. Also compare Zeerust.

For a list of tropes common to steampunk, check out the Steampunk Index.

Oh, and gluing some gears on it

doesn't make it steampunk. As far as hardware hacking or Makerism specifically are concerned, (as opposed to the purely fictional stuff) the steampunk aesthetic exists on the basis of the idea that something looks good because it is good; i.e., a thing's image is an outgrowth of its (effective) fundamental design. This can be achieved in practice, by adhering to a proven engineering tradition, such as the UNIX design philosophy

There is also a steampunk genre of music (see Music, below), an element of cosplay, and the intersection with the Maker movement as described above (with designers such as Jake von Slatt receiving some mainstream attention). The Other Wiki also has an article

about steampunk as well.