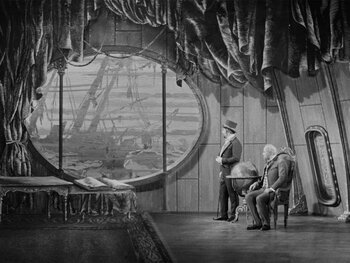 Invention for Destruction (Czech title: Vynález zkázy) is a 1958 Czechoslovak black-and-white science fiction adventure film, directed by Karel Zeman, produced by Zdeněk Novák, and starring Lubor Tokoš, Arnošt Navrátil, and Miloslav Holub. Based on several works by Jules Verne, primarily his 1896 novel Facing The Flag (with which the film shares its Czech title), the film evokes the original illustrations for Verne's works by combining live actors with various forms of animation.

The film was distributed in North America by Warner Bros. Pictures in 1961 and was dubbed into English and retitled The Fabulous World of Jules Verne.

An evil millionaire named Count Artigas plans to use a stolen super-explosive device to conquer the world from his headquarters inside an enormous volcano.