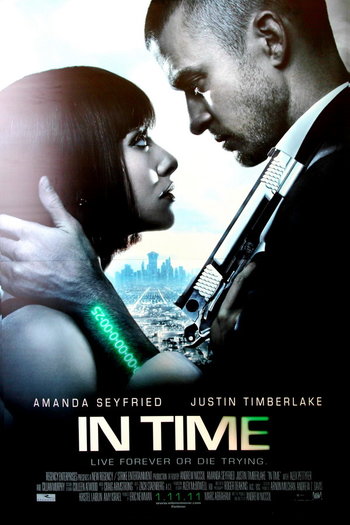 Philippe: For a few to be immortal, many must die.
Will: No one should be immortal, if even one person has to die.
Advertisement:

In a retro-future when the aging gene has been switched off, people must pay to stay alive; though everybody stops aging at 25, stamped on their arm is a clock showing how long they have left to live, a year, which starts ticking the instant they reach 25 years of age. To avoid overpopulation, time has become the currency and the way people pay for luxuries and necessities. The rich can live forever, while the rest try to negotiate for their immortality. A poor young man is accused of murder when he receives a fortune of time from a dead upper class man, and is forced to go on the run from an FBI-like police force known as the Timekeepers. The poor also live in fear of the Minute Men, a ruthless gang that robs people of all their time, killing them.

It shares quite a few elements from "Time is Money", a short story by Lee Falk first published in Playboy in 1975. Is strongly reminiscent of both Logan's Run and The Fugitive, though it's not a remake of either. It also shares some elements with Equilibrium. Harlan Ellisonnote © 2005 Harlan Ellison sued to try to get it withdrawn on the basis that it was an unauthorized adaptation of his story "Repent, Harlequin! Said the Ticktockman", but on November 4, 2011, he ultimately agreed to a settlement similar to what he got for The Terminator (i.e. his name will be added to the credits). He ultimately dropped the suit altogether before the month was out, having seen the film.

Not to be confused with 2013's About Time, which is about time travel.