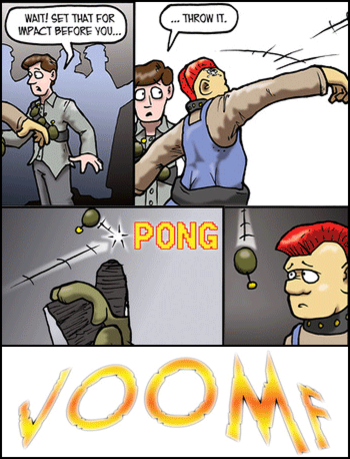 When a character manages to unintentionally blow only themselves up with the explosives that they are carrying. The character can either be mishandling unstable explosives, or they can be a failed suicide bomber. No matter the case, the explosion is usually caused by their own stupidity, making this a case of Too Dumb to Live and often an Epic Fail. It is a good way to show the audience that the character is REALLY DEAD, because the person unfortunate enough to have this happen to them always dies instantly.

One possible outcome of riding a Nitro Express or screwing up a Powder Trail. Or Alcohol-Induced Idiocy.

Compare Jumping on a Grenade for when a character does this to protect others from a blast (see Heroic Sacrifice), Hoist by His Own Petard for when a villain is killed by a bomb he meant for the heroes (see Karmic Death), Throw the Pin when someone holds on to the wrong part of the grenade after pulling the pin and throwing, Pineapple Surprise when someone pulls the pin on the grenade their enemy is holding, and Boom in the Hand when someone held onto a primed bomb for too long. Contrast Somebody Set Up Us the Bomb when the character is surprised by a bomb someone else planted.

This is a Death Trope, so spoilers ARE to be expected.

Henry throws the grenade at the guards but it comes back to him before he can close the door.

Henry throws the grenade at the guards but it comes back to him before he can close the door.