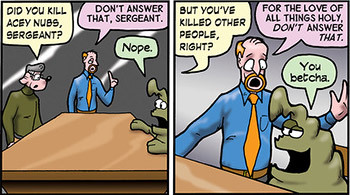 The accused is in an interrogation room, and has demanded a lawyer, who has arrived. The lawyer sits at his client's side as the detectives/crime lab/whoever drops a key piece of evidence on the table and accuses them again of the crime.

The client immediately begins to confess. Sometimes the lawyer will attempt half-heartedly to stop him ("Don't answer that" or "This interview is over"), but the new evidence causes so much grief and repentance that the victim gives a bone-chilling Motive Rant which real-life detectives would kill to have. Sometimes, the lawyers don't say anything. One can only assume they got their payments up front. Often the result of an Exasperated Perp.

Legally speaking, the detectives can ask anything they want once the lawyer is available to the client, but if the lawyer asks or demands to speak to the client alone, then police officers are required to leave the room or otherwise allow a private discussion. The fact that the lawyers in TV shows simply tell their clients not to answer something does not prevent the detectives from continuing to question. Which usually means that the lawyers are pretty damn ineffectual.

Another type of Don't Answer That (featured in The Closer frequently, and both nonfiction-book and fictional-TV versions of Homicide: Life on the Street) is a ploy used by a detective to get suspects to waive their rights. ("He came at you, didn't he? That's self-defense. Whole different thing, then..." "Yeah, he did! He-!" "Whoa, whoa—don't answer that—you can't tell me that sort of thing unless you sign this waiver...")note For the record, this is not true, at least in the American legal system. While the police would probably love for a suspect to waive their right to counsel, it's not a necessity for questioning, as one must specifically invoke one's right to counsel for it to apply.

The meta-reason for this trope is that viewers are aware that the interviewee is entitled to have a lawyer in the room, but narratively, they have nothing to do - the interesting interaction in the scene is between the suspect and the investigator, and having the lawyer do his job realistically would just put frustrating bureaucratic roadblocks in the way of the Pull the Thread process.

Not to be confused with when someone tells someone else not to answer the door, phone, or whatever, or when one character asks an overly obvious or hypothetical question, and then quickly tacks on, "Don't answer that!" when he realizes that he's just committed a Rhetorical Question Blunder.