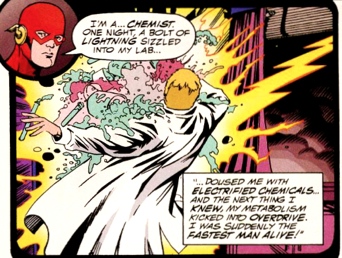 Remember, kids: if you douse yourself in chemicals in a lightning storm enough times, you too may become a superhero!
"Bitten by radioactive beebles in a freak algebra accident, young Ricky Robertson discovered he'd gained the ability to harness the awesome power of fractions!"
— Magic: The Gathering Flavor Text for Fraction Jackson

An opportune, unplanned and unrepeatable (hence "Accident") event that gives a character their superpowers. Similar to No Plans, No Prototype, No Backup, only for people instead of machines and technologies. Opinions on this are extremely subjective, and this origin isn't used as much nowadays.

Given the relatively tiny probability of being struck by lightning, it also ties in with that.

More tolerated in superheroes created decades ago. Remakes tend to either avoid these random-chance origins or eventually tie them into a grander mythos (or at least a Story Arc of some kind).

It is still used frequently, despite having very nearly become cliché, making it an Undead Horse Trope. This is probably due to the fact that superheroes don't exist in real life, and it is simply difficult to find other ways to make superheroes.

Can also be used to create a Monster of the Week, with the same caveats. This can be used to create a Science Is Bad plot if wanted when things have Gone Horribly Wrong. See also Disposable Superhero Maker, Miraculous Malfunction, Testing Range Mishap. Contrast Mass Super-Empowering Event.