Series / Shake it Up 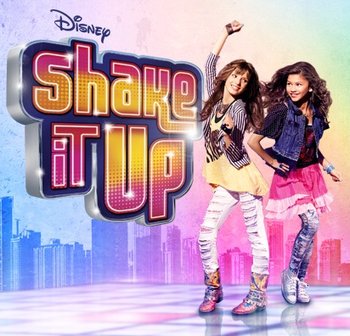 Shake It Up (sometimes stylized as Shake It Up!) is a Disney Channel Original Series, developed by veteran TV producer Chris Thompson (in his final series creator role) that aired from November 7, 2010 to November 10, 2013.

The series revolves around Heterosexual Life-Partners Cecilia "CeCe" Jones (Bella Thorne) and Raquel "Rocky" Blue (Zendaya), two young teen best friends from inner-city Chicago who find themselves one step closer to their dream of becoming professional dancers when they're hired as backup dancers on Shake It Up Chicago, an American Bandstand-style variety show.

Exists in the Disney Channel Live-Action Universe due to Teen Court appearing in an episode, and later on a full Crossover episode with Good Luck Charlie.

Shake It Up provides examples of:

Cece and Flynn switch bodies due to a curse accidentally used by Tinka.

Cece and Flynn switch bodies due to a curse accidentally used by Tinka.