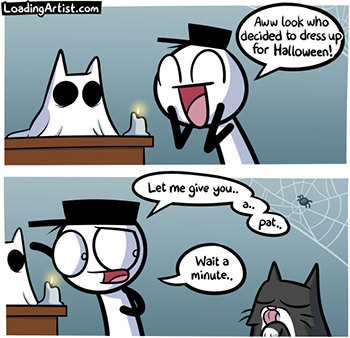 Our hero is spending a quiet moment with a loved one. They enjoy some relaxing conversation, and maybe even take their companion into a tender embrace. Then, the door opens (or, alternatively, the phone rings) to reveal that the loved one is actually some distance away from them, and has been for some time. Cue the dawning moment of realization as our hero slowly looks back to the person right next to them...

Basically, some ghost, ghoul, or other evil creepy has decided to pose (using disguise, darkness, or some other subterfuge) as a friendly character. Whether it's for a specific reason or purely to freak out the protagonist (and the audience) we cannot be sure. In some instances, the disguised villain vanishes unnoticed upon the intrusion of the character they are impersonating, and the audience never sees their face. However, in most modern horror films, we are treated to a sudden shot of the monster in all its freaky glory, accompanied by a good, old-fashioned Scare Chord. Note that the threatening presence will remain hidden up until the hero discovers the deception (compare Gravity Is a Harsh Mistress).

A variant of this trope misdirects the audience by presenting the approaching loved one, perhaps through shadows, footsteps, and creaking floorboards, as if they themselves are the monster (which may cause the unwitting protagonist to huddle close to what they think is their loved one for protection) before the truth is revealed.

Compare Bedmate Reveal and Mistaken for Object of Affection. In a moving vehicle, this sort of reveal will often be Played for Laughs, prompting another character to ask, "Who Is Driving?". If it's subverted at the end, that's a Shock-and-Switch Ending.