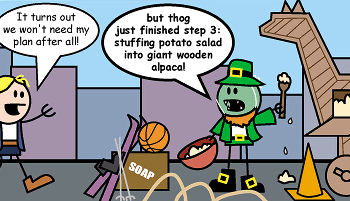 Gumball: I only have one question, though. What were you gonna do with the fan and the dice?
Jamie: Nothing. I know people who imagine way scarier stuff than anything I could think of. So I just took any two words together. You, me, a jug of gravy, and an umbrella. A flame and a French horn. A feather duster and a pack of mini pizzas.
— The Amazing World of Gumball, "The Girlfriend"
Advertisement:

Sometimes the best way to describe something is to give a few hints and let imaginations run wild, especially if you aren't allowed or can't be bothered to get explicit. One common way is to imply the general feel and mention a few outlandish items to be used but not how they are used. After all, who could come up with a funnier scene involving these odd tools than the viewer's imagination could?

Noodle Implements is used to suggest an act that would normally be unthinkable to show, by listing a set of objects in context. The most common uses are for an especially Zany Scheme, some delightfully exotic sex or some truly ingenious torture. The phrasing and circumstance makes it obvious, but the unknown act appears much more intense. Or more silly.

If the Noodle Implements are used erotically off-camera while a character or characters observe, they may find the results Head-Tiltingly Kinky.

In some cases, savvy characters will intentionally invoke this trope when questioning someone they've captured. Differs from Maximum Fun Chamber in that the character in question doesn't really know how to use the items to torture someone.

Contrast And Some Other Stuff, where you see exactly how real implements are being used but their precise identity is obscured to prevent idiots from trying this at home.

See also Maximum Fun Chamber, Comic Sutra, and Lost in Transmission. Compare Cow Tools, That Mysterious Thing. For lists of items used to commit an elaborate but unseen murder, see Once Killed a Man with a Noodle Implement. Not to be confused with Informing the Fourth Wall.

We aren't told what a beaver and a toy taxi have to do with a friendship test. But that's probably for the best

We aren't told what a beaver and a toy taxi have to do with a friendship test. But that's probably for the best