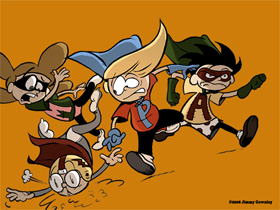 Comic book series created in 2001 by Jimmy Gownley. Ostensibly for teenagers, but enjoyable for adults.

Consists of seven collected volumes: The Whole World's Crazy, What Makes You Happy, Superheroes, When the Past Is a Present, The Tweenage Guide to Not Being Unpopular, True Things (Adults Don't Want Kids to Know) and The Meaning of Life ... and Other Stuff. The 8th (and final) collected volume, Her Permanent Record was released in 2012. One of the stories from The Whole World's Crazy has been released separately (A Very Ninja Christmas) together with a separate story of how Amelia met her friends.

Fourth-grader Amelia Louise McBride moves with her newly divorced mom from New York to live with her aunt in Connerton, Pennsylvania. She quickly becomes friends with Reggie Grabinsky and the enigmatic Pajamaman (who moonlight as superheroes Captain Amazing and Kid Lightning), and just as quickly becomes Vitriolic Best Buds with their other pal, loudmouthed Rhonda Bleenie.

The four of them form GASP, the Gathering of Awesome Super-Pals, to defend the neighborhood from evil. Amelia's life in her new neighborhood is fraught with obstacles hilarious and serious, from regular wars with the evil Ninjas from across town to homesickness for New York City and her father.