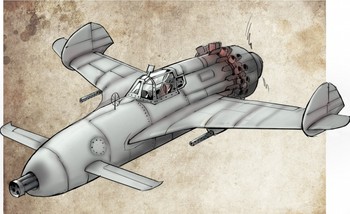 Your typical Warbird
In the year 1804, a massive hurricane struck the Caribbean. Days later, the survivors emerged to find themselves and their islands no longer on Earth but instead floating in the sky of another world.
Advertisement:

Eventually, the people of this world built airships to travel to other islands, and came to call their world Azure. Around the same time, (about 1980 in our world) the first airplanes were invented, and came to rule the skies, often deployed from airships, now suspended by floatstone, the same material that allows the islands to float, and powered by diesel, extracted from the thick,unbreathable clouds that lie below the clear blue skies of Azure.

It is the year 2039, and you play as a rookie pilot for the Fighter Guild, a mercenary organization comprised of the best pilots Azure has to offer. Being a Guild pilot has its perks. Even the lowest rookie is moderately famous, you fly one of the best planes in Azure, and get to shoot people for a living.

Azure itself is composed first of the Murk, a turbulent "sea" of inert gases and abrasive dust. Plane engines choke, humans cannot breathe, atmospheric dust rips apart any vehicles that enter, and the pressure rapidly increases as you go down. However, some streaks of murk contain heavy hydrocarbons, from which diesel can be refined. Emerging from the Murk is the Eye, an invisible yet powerful updraft, that serves as a magnetic North Pole, a point for the islands of Azure to "orbit" around, and as a massive source of Radio interference. First up around the Murk is the lowlands, only about 12km above the Murk, orbiting the Eye 4 times a year. The lowlands are composed of much of Florida, renamed Tegesta, and is mostly untamed, populated by a few pioneers. Alongside Tegesta, there is the Yucatán peninsula, home to a resurgent maya population. Next up are the midlands. Orbiting twice a year, 100km above the lowlands, they are composed of Haiti, Puerto Rico, Cuba, and Santiago, the last of which is the half of Cuba that broke off during the Storm. The midlands have the majority of the population of Azure, but are short on resources and their nations are often at odds. Over 200 kilometers above the Murk are the uplands, orbiting one a year. Consisting of Jamaica, Trinidad and Tobago, various small islands, and the Florida Keys, the latter more or less owned by the Guild. They are wealthy and tropical, and constitute the upper crust of Azure. More distant from the Cenral Islands are Nassau, one of the last bastions of pre-storm traditions, and the pirates tangle, the source of the Sky Pirates the Guild formed to combat. There are various errant isles often following highly elliptical orbits.

The optional rules have room for mad science, catholic mysticism, Haitian vodou and mayan ritualism. Warbirds has 4 sourcebooks. You Must be Mad extends rules for mad science and provides examples of projects and organizations, Space Age is just the game Recycled IN SPACE!, and World War II and Jet Age are self explanatory. The rules system is cinematic and streamlined. The game's page is here

Tropes appearing in Warbirds include: