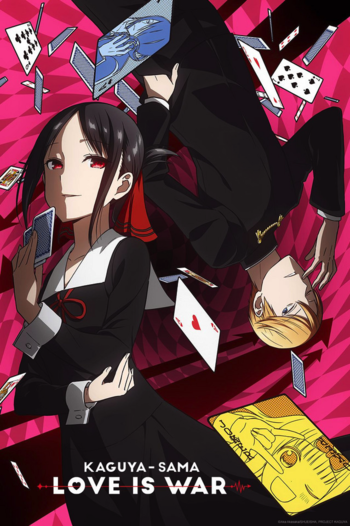 ♫ Love is a battlefield ♫
Love is war...and the one who falls in love loses!
Advertisement:

Shuchi'in Academy is one of the most prestigious schools in Japan, attended by only the wealthiest families. Our main characters are the student council of this school. The vice president, Kaguya Shinomiya, comes from a family which owns one of the largest companies in Japan, mastering multiple forms of artistic and intellectual subjects. The president, Miyuki Shirogane, while of common birth, is a Teen Genius with one of the highest grades in the country.

These two geniuses slowly fell for each other, yet their gigantic prides would not let them be the one to confess. So, they secretly began a battle. That is, the battle to make the other side confess first!

Kaguya-sama: Love is War (Kaguya-sama wa Kokurasetai ~Tensai-tachi no Ren'ai Zunousen~, or Kaguya Wants to be Confessed to ~The Geniuses' War of Love and Brains~) is a Seinen manga by Aka Akasaka. It started publication in 2015 as a monthly series in Miracle Jump, but was later moved to Shuukan Young Jump as a weekly series in 2016, where it is still ongoing. By 2018, the series also gained two spinoffs: a Hotter and Sexier "Doujin Edition", and a lower deck Yonkoma called We Want to Talk About Kaguya focusing on two Shuuchin students looking at the plot from the outside. In March 2018, Viz Media began its release of the English translation.

On June 1, 2018 an anime adaptation was announced, coinciding with the release of Chapter 100.note Well, Chapter 110. As mentioned above, the first 10 chapters were published in a different magazine from the rest and the numbering started over when it changed. This anime premiered in the Winter 2019 season, developed by A-1 Pictures. A second season was announced on October 19, 2019, and premiered in the Spring 2020 season. A third season and OVA were both announced on October 24, 2020 with the latter being released as a preorder bonus for volume 22 on May 19, 2021, and the former later being confirmed for a Spring 2022 release. Funimation began releasing an English language dub on July 25, 2020.

Oh, so you want to see this series' tropes? How cute.

open/close all folders
A-H
I-P
R-Z
Result of today's battle:
(Due to spending too much time on TV Tropes)
TROPER LOSES
Feedback

Alone at the bonfire

Maki finds herself as the only one without a partner at the culture festival's bonfire.

How Callous of You

Alone at the bonfire

Maki finds herself as the only one without a partner at the culture festival's bonfire.

How Callous of You