Make Way for the Princess 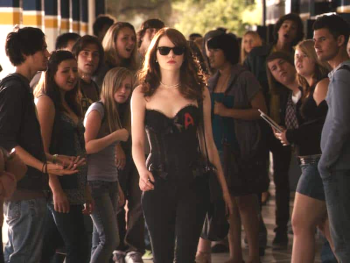 The trumpets blare announcing her entry. She holds up her hand and the crowd goes silent. The masses before her make way as the princess parades down the aisle.

Oh, wait — this is High School.

A scene where the Alpha Bitch approaches her target in a school hallway full of students. The students, immediately acknowledging her presence, will move out of the way for her, creating a clean path right through the middle of the crowd. When the Alpha Bitch is finished chewing out her victim, she will exit, and the path behind her will close up as quickly as it appeared. It's almost like she's parting the Red Sea herself.

Often combined with a Power Walk, to really get the point across.

Occurs in a lot of shows with middle/high school as the main setting, where social hierarchy is king, and the Alpha Bitch is next in line. The Cool Loser is usually the one at the end of the path.