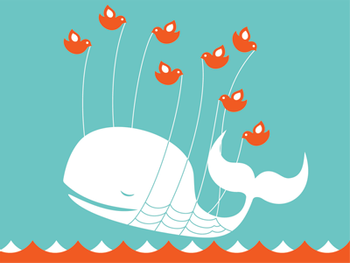 is a "microblogging" service introduced in 2006, where users post 280-character "tweets".note The initial limit had been 140; most users now have access to 280 under most circumstances. They can be mundane reporting on their life, a wry one-liner, or the start of an Internet campaign that will snowball and end up with international media coverage. Really, for just 280 characters, there's lots of potential.

The site's open, public API allows for its adaptation and use on many different platforms. Android, iPhone, browser extension, desktop software, mobile phone... you can tweet from just about every device going. Hell, you can even monitor tweets with a typewriter

The site is trendy. The real-time search function, which allows you to search all (public) tweets being made for any word or phrase you wish, is one of the most popular aspects of the site. This is combined with the "trending topics", a list of the ten most popular topics at the moment, based on how much they're being tweeted about. This list of trending topics will almost always include Justin Bieber, at least until Twitter supposedly banned his name from trending and his fans made "let Bieber trend" a trend instead. When they were no longer able to do that, they resorted to trends like "Bustin Jieber". Still, Justin Bieber related topics trend almost every day, and in 2012, they were joined by topics about British-Irish boy band One Direction.

Twitter has gotten a lot of media attention. Major events tend to be covered rapidly through the system, and it has become hip in Hollywood for a celebrity to have a Twitter account. Twitter nicknames get given out like email addresses. In fact, despite the Bieber/1Dmania, Twitter appears to be the first Friending Network type site (aside from work-oriented LinkedIn) in which thirtysomething media professionals outnumber teenagers. As of this writing, it is widely considered the most prolific social media platform on the internet, to the extent where its userbase is capable of having major impacts on the outside world, for better or for worse.

In late September 2017, for some users, Twitter increased the character count to 280. On November 7th, they finally enabled the option to everyone, replacing the previous, classic limit.

, or browse TV Tropes Twitter-style with the Laconic Wiki.