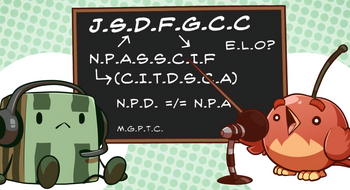 "IDK what U R saying ROFL."
Yeah, we TTC (Turned The Corner)
Had an RHG (Red Hot Go)
We OTFG (Opened the Flood Gates)
We got BIT (Back in Town)
Yeah, we LOG (Lifted Our Game)
Took a good hard look at ourselves
— Greg Champion, "Red Hot Go"

Fan communities create their own acronyms and abbreviations, to make it easier to speak about the works they love. An AaAO is when this is taken so far that it is so downright confusing you can't tell a story about broadcasting in the CoN from a sex scandal involving Black politicians in the USA.

For example, if you have visited online gaming communities, you've likely seen it already many times. You're simply SOL against the BBEG, so you GFGI to find a FAQ for how to get to the PoPL so you can LG your MP to godly levels and render him FUBAR. And the FAQ is composed entirely of shorthand, rendering it illegible.

When used in media (as opposed to being used in talking about media), it tends to feature in an Expospeak Gag or aiding the resident MM. Or both.

Not to be confused with Fun with Acronyms, because that trope is about acronyms that are humorous rather than accurate, as opposed to simply having too many acronyms to remember, or acronyms that you'd have to be an insider of the community to know.

A slew of acronyms tends to follow around luminaries whose multifarious titles and degrees would be impossible to fit on a business card if fully written out. This was the most common form of this trope before acronyms became widespread in names of government agencies and military jargon. See also Knight Fever for those acronyms that stem from British/Commonwealth honours.

When writers include an overload of acronyms, they usually do so in the hope that you'll end up R.O.T.F.L.O.L.Y.F.A.O. Occasionally they'll throw in some acronyms that refer to Deadly Euphemisms along with more benign euphemisms in the hopes that you'll do a mental Double Take and think O.M.F.G.!

Can lead to Acronym Confusion.