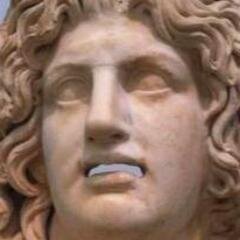 "Go ahead. Make him a vampire. Make them ALL vampires"
No, seriously, go for it. It'll be a bestseller.
Advertisement:

is a Twitter parody account created by Jay Edidin. In it, the titular muse gives horrible writing advice disguised as useful tips for budding young writers.

Compare Terrible Writing Advice and How to Write Badly Well.

Compare and contrast How NOT to Write a Novel.

NOTE: While you'd be tempted to just quote the Twitter feed since most examples are just Discussed Tropes and, as such, are "self-explanatory", DO note that by doing so, you would only create Zero-Context Examples that could lead to this page being cut (again).

The Worst Muse provides examples for the following tropes: