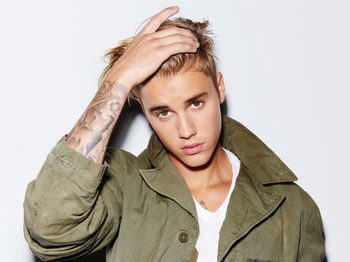 You should go and love yourself.
Advertisement:

He was signed in 2008 after a record scout discovered videos of him singing on YouTube. His first single was released in 2009, when he was fifteen years old. Within a year, his fame had snowballed. He was easily recognized in this phase for his catchy songs, his haircut, a dance-pop sound typical of that time (with some acoustic detours), and a voice that was still a boy soprano. Over the next few years, his voice dropped to an adult tenor, he had more hits and he moved away from his early boyish image.

The rise of social media was also important to Bieber's Teen Idol stardom. Other artists had benefitted from it before, but Bieber's popularity on there was unprecedented. He was so popular on Twitter that his name trended there almost non-stop, until Twitter changed "trends" to favor novelty over volume. Like a 90s Boy Band but maybe on a greater scale, he drew a massive and devoted fanbase (nicknamed Beliebers), but also ridicule and hate. He generally got good reviews from music critics, who acknowledged his hits were catchy.

After his early run of success stalled in 2013, Bieber's 2015 New Sound Album reinvigorated his career and spawned three big hit singles. It moved him to a maturer image and sound, with more R&B and hip hop influences. After a series of collaborations and a long hiatus, his most recent album was released in 2021.

If I was your boyfriend, I'd make you a list of tropes: