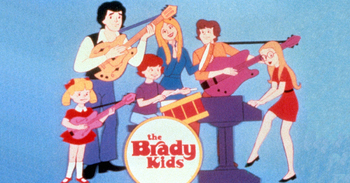 Certain musicians believe that a song is better when children sing as part of it. This trope, however, is the concept taken just a little further; the children are the credited performers.

The reasons vary. Perhaps one of the parents is a musician or a producer and is getting the kids involved young. Perhaps a Stage Mom really wants it to happen. Perhaps this is tied into something commercial. Perhaps the kids themselves are Doing It for the Art. Often, because they don't know what they're doing, they will sound bad; but you can find a Child Prodigy here and there.

Child popstar may join a Boy Band as they mature, assuming they can bear to give up the instrument. Indeed, several boy bands initially fit here. Others become Teen Idols.

Not to be confused with Kids Rock, in which a children's choir sings backing to a performer. Related to Teen Pop.

Onpu Segawa performing onstage with Doremi, Hazuki and Aiko as her backup band in Sharp.

Onpu Segawa performing onstage with Doremi, Hazuki and Aiko as her backup band in Sharp.