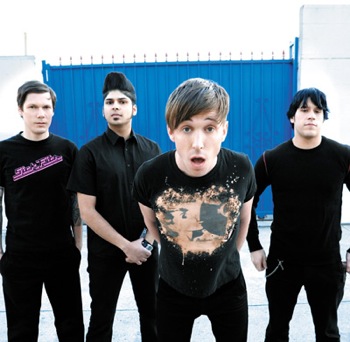 From left to right: Aaron Solowiniuk, Ian D'Sa, Ben Kowalewicz and Jon Gallant
Billy Talent is a popular Canadian punk/alternative rock band based in Mississauga, Ontario. The band essentially started as a good old-fashioned garage band in Streetsville, a suburb of Mississauga. All four band members attended Our Lady of Mount Carmel Secondary School during high school, where they were all part of various high school bands. Ben and Jon formed a band called To Each His Own and brought in Aaron to play drums. Ian joined afterward and the four formed a band called Pezz in 1993, playing in the Toronto underground rock scene after graduating high school.
Advertisement:

As Pezz, they gradually grew in popularity within Toronto and eventually pooled the money needed to record and release a full-length album called Watoosh! The album saw the band experiment with numerous genres and styles. After realizing that a band in the US was also named Pezz, they changed their name to Billy Talent, after a character in the film Hard Core Logo. The change in name coincided with their musical styles focusing on punk and alternative rock. After being noticed by a local radio station rep, the band gained more exposure in the Toronto area and were finally noticed by a mainstream studio after the same rep left to go work at Warner Music Canada in the A&R department. The band was signed on and began recording and playing music for a mainstream audience.

Through their three albums as Billy Talent, the music style has shifted noticeably. While the first album, the self-titled Billy Talent, was full of angsty punk anthems, the second album saw their music and lyrics start to refine. Ben's vocals in particular were toned down, leading to less screaming and more singing. The third album continued in the evolution, resulting in a band whose music has essentially grown up and matured as they have. Over the course of the twelve years they've now had in the mainstream, their popularity has exploded in Canada and in Europe, where they continuously play in well-known festivals and headline to sold-out crowds. In August 2010 they finished their tour and were working on their fourth album. The band has said that it will not follow the Chronological Album Titles of the first three and would also move towards a heavier sound, and that album received much more positive reception than the last one. In 2014 they had a Greatest Hits album, showing how successful they really are.

In January 2016, drummer Aaron Solowoniuk, who experienced a MS relapse, decided to (at least for the time being) step down from drumming. Jordan Hastings of Alexisonfire is currently filling for him and has also performed on their latest album Afraid of Heights.