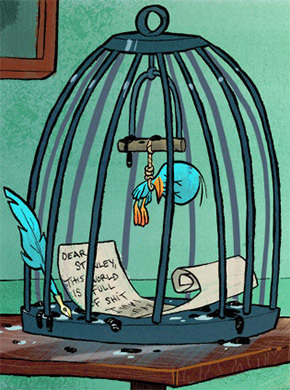 The suicide note. The final explanation for why one is shuffling off this mortal coil, quitting the earthly sphere, leaping off to join the choir invisible. The composition of such a note - rife with anguish, despair, and turmoil - can take a while; this may, happily, lead to an Interrupted Suicide Just in Time. Maybe, instead of writing things down, the victim could leave behind a Video Will. It could even be part of the elaborate facade involved in Faking the Dead or covering up a murder. In a murder mystery, it's often found to be forged in some way by our local Amateur Sleuth. The lack of a suicide note will immediately and in all cases prompt law enforcement to suspect that the death is not a suicide even if suicide appears obvious; in this case, the real cause of death will usually be homicide, accident, or natural causes.

Not as much Truth in Television as some might assume. This trope has led many people to believe that every suicide victim leaves a note and conversely that if there isn't a note, it couldn't have been suicide. An approximate guess is that fewer than one-third of suicide victims in the United States leave notes, and the older the victim is the less likely he or she will leave a note. Whether this is because older people have outlived their families or because younger people have learned from this trope that they 'should' leave a note is unknown since it's tough to ask a victim of suicide. Younger victims seem more likely to leave a note if a celebrity has done so in the very recent past. In Japan, this may take the form of a zetsumei-shi, or death poem. It is traditional to compose one right before committing seppuku (so expect to see a lot of these in historical fiction).

Even so, fewer than half of young American suicide victims leave notes, and it's only a very small percentage of them who leave suicide videos, so don't expect the lack of a suicide note to send the cops out looking for a murderer in Real Life. Outside of the US (even in Canada and the UK), suicide notes are even less common.

Related to Prelude to Suicide.