Gravity Is Only a Theory 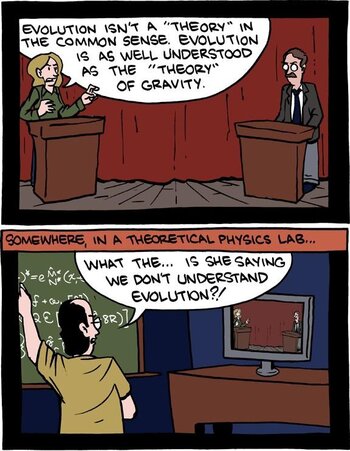 [People say] "But evolution is only a theory!", which is true, I mean it is a theory and it's good they say that, I think, because it gives you hope, doesn't it? That they feel the same way about the theory of gravity and they might just float the fuck away...
— Tim Minchin
Advertisement:

Dissing gravity as a way of dissing either reality itself or some theory/guess/world-view.

A large part of this trope's use in both fiction and Real Life stems from the fact that 'theory' means something very different in a scientific (and philosophical) context to its everyday use, which could be summed up as 'unconfirmed idea'. 'It's just a theory' is a common way to indicate lack of confidence/certainty. This is not at all how the word is used in science, which gives many scientifically ignorant laypeople the confidence they need to attack any science of their choosing. What "theory" actually means is a tricky, tricky subject — just go to your friendly university library and ask for some books on philosophy of science. In some works, however, the theory of gravity comes under fire as well, most often for purposes of analogy and satire. note The presence of gravity is not theoretical and is very clearly observed. It's the explanation of how gravity operates (as opposed to the phenomenon itself) that is indeed a theory, and has changed from time to time in the wake of new evidence, as scientific theories do. Gravity is currently best explained by the General Theory of Relativity, which has been empirically demonstrated to be correct, but which conflicts with quantum mechanics, which treats time as a constant.

For various reasons, the theory of evolution is the only scientific theory that gets challenged on a regular basis in Real Life. This has caused many science communicators to assert that evolution has so much evidence supporting it that it may instead be considered 'scientific fact'. note To be perfectly precise, a theory is a model that interprets and explains facts and allows for prediction — using the gravity example, a fact is that when I dropped my pen just now, it fell to the floor, while theory of gravity is a conceptual framework that lets me say, with reasonable conviction, that my pen will fall to the floor when I drop it tomorrow, and it would have fallen to the ground if there were no floor. It might do so by claiming gravity waves, gravitons, curvature of space or tap-dancing garden gnomes, and we have no real way of determining which one is true — only of weeding out theories that are false (because a false or insufficient theory will fail at prediction eventually).

See also: I Reject Your Reality, Science Is Wrong, What We Now Know to Be True, and Outgrown Such Silly Superstitions — and see Gravity Is a Harsh Mistress for when gravity itself is simply acting goofy.

"Only a theory", other theories than gravity and evolution

The Amazing Atheist does a Take That! to Josh Feuerstein and his reasoning against evolution in "Gravity Disproved In 2 Minutes", where his character Josh Moronstein uses the same line of logic as Feuerstein to "disprove" that gravity is real using a helium-filled balloon.

The Amazing Atheist does a Take That! to Josh Feuerstein and his reasoning against evolution in "Gravity Disproved In 2 Minutes", where his character Josh Moronstein uses the same line of logic as Feuerstein to "disprove" that gravity is real using a helium-filled balloon.