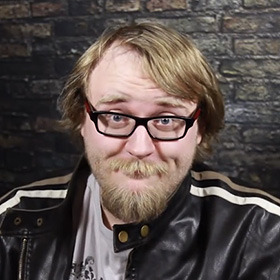 T.J. in his natural habitat
I review the previews, to let YOU know which trailers are failures!
— The Distressed Watcher
Advertisement:

Thomas "The Amazing Atheist" Kirk (or as he ironically calls himself, the god of the Godless) is an atheist who has been making videos on YouTube since joining the site on November 20, 2006. Although the subject matter of his earlier videos centered almost entirely around atheism and anti-theism, he rarely deals with those topics today. Instead, most of his current videos are either social commentary or purely comedic in nature.

His style is loud, boisterous, and unapologetically offensive. However, he claims that these are his honest opinions. The Amazing Atheist never has even the slightest qualm about speaking his mind, despite sounding offensive to various targets. That hasn't stopped him from making quite a few enemies, especially because of his strident anti-radical-feminism. In recent years, he has befriended author and activist Howard Bloom, and has given Bloom the floor on several topics. He also co-hosts the Drunken Peasants podcast with Ben and, on occasion, his brother Scotty.

He has also written four books: In Defense of Evil, Scumbag: Musings of a Subhuman, Final Revelation, and Neckbeard Uprising. Like most of his videos, the books are part philosophical, part comedic, and part autobiographical.

When not using the Amazing Atheist moniker, he often goes by T.J., Terroja, or The Distressed Watcher. His YouTube channel can be found here

. His alternate channel, TJdoeslife, where he posts off-topic videos, Q & As, and other things that wouldn't fit on his main channel, can be found here

. Though he was forced to take down most of his older videos in early 2009 due to YouTube's increasingly strict censorship policies, you can watch a few hundred of them here

if you are so inclined.

TJ laughs off the threat of swine flu as hyperbole. And then...

TJ laughs off the threat of swine flu as hyperbole. And then...