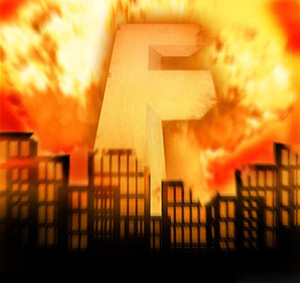 That's a bit more literal than intended . . . .
Spoony: Oh, we're winding up to a big ol' "Nooooo!"
Quinlan: FUUUCK!
Spoony: …or that works too, I guess.
— Let's Play of Ripper, The Spoony Experiment

The Precision F-Strike relies on timing. The Cluster F-Bomb relies on frequency and multitude.

The Atomic F-Bomb relies on VOLUME.

Sometimes this trope is self-censoring and cuts to some other scene (like birds flying away) to imply the volume.

A Sub-Trope of Big Word Shout and Chewing the Scenery

No relation to Dirty Bomb.