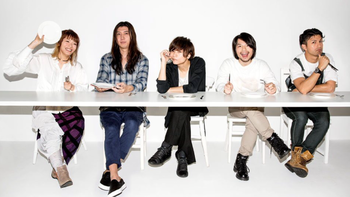 The meaning of our lives, the reason we can't die
Is that we've always been anxiously awaiting this day
"St. Light" (2020)

BIGMAMA are a Japanese Alternative Rock band from Tokyo formed in the early 2000's, consisting of Masato Kanai (vocals, guitar), Hiroya Kakinuma (guitar, vocals), Mao Higashide (strings, keyboard), and Hideto Yasui (bass)note As of May 10, 2020, the band is without a permanent drummer. Their defining characteristic is the inclusion of a violin and increasingly ambitious string/orchestral arrangements throughout their career, and they're best known in Japan for their EP trilogy Roclassick, in which they sample well-known classical pieces.

Originally formed in 2001 while the members were in high school, BIGMAMA signed to RX-Records (under the independent record company UK.Project) in 2006 and released their debut EP short films. After a quick lineup change in which Hideto Yasui and Mao Higashide joined the group, they released their first album Love and Leave, and steadily gained notoriety from then. By the release of (and with the help of) the "Secret to Lucy" single in 2011, they had become one of UK.Project's biggest artists.

They culminated their independent music career and marked their ten-year anniversary with a show at the Nippon Budokan, where they announced they would continue their career with Universal Music.

Nothing to do with the movie character of a similar name.