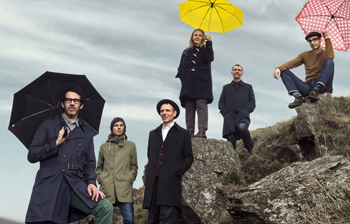 None of them are actually named Sebastian.
Advertisement:

Belle and Sebastian are a Scottish Indie Pop band who have been compared to The Smiths and Bob Dylan. They often couple sweet, soft and hummable melodies with surprisingly cynical and provocative lyrics. The band name actually has nothing to do with the names of the band members (although they used to have Isobel Campbell, a.k.a. "Belle", in the group) but comes from a 1965 French children's book called Belle et Sébastien.

In 2009, Stuart Murdoch formed a side project called God Help the Girl, which released a single eponymous album. The songs on the album were of a similar style to Belle and Sebastian, but the lyrics focused more on the experiences of young women. Likewise, women sung most of the songs (though a fair number of normal Belle and Sebastian songs also have women singers). At some point, Murdoch though about using the songs for a film musical, but had no way of putting this into action.

At least until Kickstarter came around, which let Murdoch direct and produce God Help the Girl in 2014.

Belle and Sebastian provides examples of the following tropes: