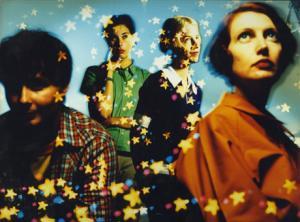 Stereolab are a French/English rock groop who played what might best be described as either "avant-garde M.O.R." or "space age bachelor pad music". They formed in 1990 from the ashes of the politically astute Jangle Pop band McCarthy and were among the first wave of Post-Rock musicians, mixing Krautrock and "motorik" rhythms, pointillist fuzzed-out guitar melodies, vintage synthesizers, and lounge-pop influences. Said lounge-pop grew in influence over the years until, by 1997's Dots and Loops, they were basically playing pop music—albeit, pop music from an alternate universe where Raygun Gothic never went out of fashion, where Burt Bacharach and The Free Design are revered as musical gods, and where 11 minutes is a perfectly acceptable song length.

They went on an indefinite hiatus in 2009, but returned to play a series of live dates for 2019-2022. They also re-released a chunk of their old discography: deluxe editions of their albums from Transient Random-Noise Bursts with Announcements through Margerine Eclipse, and a Boxed Set of their Switched On compilations—then put out two new entries in the Switched On compilation series.

Albums and Compilations
For a comprehensive discography, see their website

The groop provides examples of: