Music / The Dark Side of the Moon 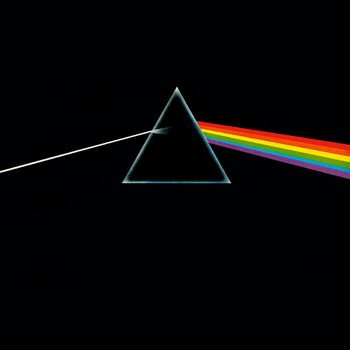 "I never said I was frightened of dying."
"I've been mad for fucking years — absolutely years. I've been over the edge for yonks. Been working with bands for so long, I think 'crikey'." note Spoken by roadie Chris Adamson

"I've always been mad — I know I've been mad, like the most of us are. Very hard to explain why you're mad, even if you're not mad." note Spoken by Abbey Road Studios doorman Gerry O'Driscoll
— The lyrics of "Speak to Me", the first track of the album
Advertisement:

The Dark Side of the Moon is Pink Floyd's eighth studio album. It was released March 1, 1973. It is one of the best-selling albums of all time, and at the time of writing, it's only surpassed by Michael Jackson's Thriller, AC/DC's Back in Black, and Meat Loaf's Bat Out of Hell in sales. The album was Pink Floyd's Breakthrough Hit, and made them a mainstream name.

Within the year of its release alone, it topped the charts in the US, Austria, and Canada, and peaked at No. 2 on the UK Albums chart, remaining on the Billboard charts for 741 consecutive weeks until it finally fell off the chart in 1988 and a subsequent revision to the charts prevented legacy albums from being counted anymore. However, once Billboard created the Top Pop Catalog Albums chart in May 1991 to make up for that change, the album swiftly shot into there, and remains on them to this day. Another chart revision in 2009 allowed the album to return to the Billboard 200 once more, and it has since accumulated a total of 958 non-consecutive weeks on the chart as of 2021, far and away the most chart weeks of any album in Billboard history.

Since its release, it has been certified double-diamond in Canada, 16-fold platinum in New Zealand, 15-fold platinum in the US, 14-fold platinum in the UK and Australia, quintuple-platinum in Italynote it sold enough there to be potentially certified even higher, but the FIMI only started counting the album's numbers in 2009, double-platinum in Argentina and Germany, platinum in France, Poland, and Russia, and gold in Belgium and the Czech Republic. However, this sudden super-stardom also sowed the seeds to the band's (especially Roger Waters') later Artist Disillusionment, which became very apparent on the band's later albums, particularly its follow-up.

In 2013, the album was adapted into a BBC radio play titled Darkside by Czech playwright Tom Stoppard of Rosencrantz and Guildenstern Are Dead fame. He describes this play as a "philosophical comedy". The teaser can be viewed here

The album was supported by two singles: "Money" and the double-A-side "Time/Us and Them".

Preceded by Obscured by Clouds. Proceeded by Wish You Were Here.

Troping away, the moments that make up a dull day:

"There is no dark side of the moon, really. Matter of fact, it's all dark."note Also spoken by Gerry O'Driscoll.

Alternative Title(s): Dark Side Of The Moon