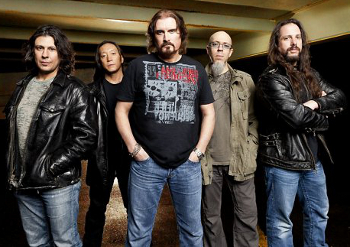 Dream Theater is a prog-metal band founded in 1985 by John Myung, John Petrucci, and Mike Portnoy under the name Majesty. They changed the name, but their logo is still known as the Majesty symbol. While not entirely mainstream, they are widely considered the face of the progressive metal genre. The inclusion of their songs in the Guitar Hero and Rock Band series have made them more recognizable to the general public, but they have still had only one song ("Pull Me Under") chart well enough to qualify as a "hit".

They are known for the extreme technical difficulty and complexity of their music, which often includes long instrumental interludes to showcase the skills of the band members. As such, much of it veers heavily into Epic Rocking territory. They are also known for their live shows, which are often really long and suitably epic.

There's a kind of Spin-Off of the band, called Liquid Tension Experiment, which started as a solo project of Mike Portnoy, but eventually ended with 3 out of 4 members of the band, as Jordan Rudess was later incorporated into Dream Theater.