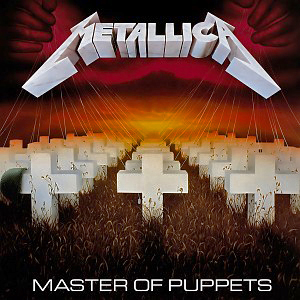 Master of Puppets is the third studio album by Metallica, released in 1986. It is their final album to fully feature bassist Cliff Burton, who was killed in a bus crash while touring in Sweden to support this album. Burton does appear on the B-sides that wound up appearing in Garage Inc.. While his death was traumatic, the band eventually decided to continue and replace Burton with Jason Newsted. This album is also their first to be released on a major label - Elektra Records.

The lyrics by James Hetfield deal with manipulation and a lack of control, but the diversity of the ideas which tackle these themes somewhat defeat the idea of a concept album. Following the template set by its predecessor, Master of Puppets was an immediate commercial success, becoming the first Thrash Metal album to be certified Platinum.