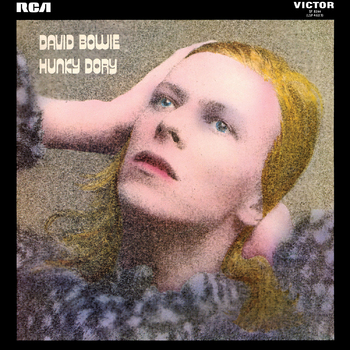 "Turn and face the strange!"
Advertisement:

Hunky Dory is the fourth studio album by David Bowie, released in 1971. After the heavy metal of The Man Who Sold the World, Bowie returned to his then-typical style of songwriting from his first two albums, with lighter, easy-listening fare. However, instead of focusing on the art hall pop of his debut album or the progressive folk of its successor, he instead turned this album in the direction of art pop mixed with Velvet Underground-inspired art rock, presaging the Glam Rock sound that would first truly make itself known a year later. To help aid in this approach, Bowie enlisted the help of Ken Scott as producer, having broken ties with Tony Visconti due to the latter's frustration with manager Tony Defries and a perceived lack of enthusiasm from Bowie himself during the making of The Man Who Sold the World. Scott had previously engineered Space Oddity and most of The Beatles' albums from A Hard Day's Night to The White Album (barring Revolver), and would continue working with Bowie for three more albums before Bowie reunited with Visconti.

While he looked to the future in the song "Changes," he paid tribute to his influences with "Andy Warhol", "Song for Bob Dylan", and the Velvet Underground-esque "Queen Bitch." He also wrote songs for his son Zowie, like "Kooks", delved into the occult with "Quicksand", and foreshadowed his next album's hit single "Starman" and continued his fascination with otherworldly apocalypse in "Oh! You Pretty Things".

As the album's recording sessions began, Bowie's contract with Philips Records and Mercury Records expired. Having previously butted heads with Bowie over the cover art to The Man Who Sold the World, Mercury were willing to negotiate a more favorable contract for the artist. However, Bowie's manager, Tony Defries, instead forced Mercury to let the contract expire, feeling slighted by the label's handling of Bowie's finances and threatening to make Bowie turn in a bad album unless they relented. Thus, once recording wrapped up, Defries spent some time going around America, showing the album to a number of labels there in search of someone who'd offer a better marketing environment for Bowie. Eventually, he stumbled upon the New York City-based RCA Records, who Defries appealed to by claiming that they "had nothing since The '50s" (alluding to Elvis Presley's heyday and his overshadowing by The Beatles in The '60s), promising that Bowie would let them "own The '70s." While the head of RCA had never heard of Bowie, he was impressed when Defries performed some tracks from Hunky Dory for him, resulting in the label bringing Bowie on-board with a three-album contract; by this point, recording sessions for The Rise and Fall of Ziggy Stardust and the Spiders from Mars were already underway. Bowie would end up working with RCA for the next 11 years.

The album received little promotion from RCA, due to its unusual cover image and a warning that Bowie would be changing his image for his next album. Because of this, Hunky Dory initially sold poorly and failed to break the UK Albums Chart. It was only after the commercial breakthrough of Ziggy Stardust the following year that Hunky Dory itself became a commercial success, peaking at number three on the UK Albums Chart (two places higher than Ziggy Stardust) and eventually being certified platinum by the BPI in 1982. In the United States, this album would not enter the charts until after Bowie's death in 2016, where it peaked at both No. 4 on Billboard's Top Catalog Albums charts and No. 57 on the mainline 200.

Like Bowie's first two albums, Hunky Dory was supported by two singles: "Changes" and "Life on Mars?", both of which have now become strong candidates for Bowie's Signature Song.

Take a look at the law man, beating up the wrong trope: