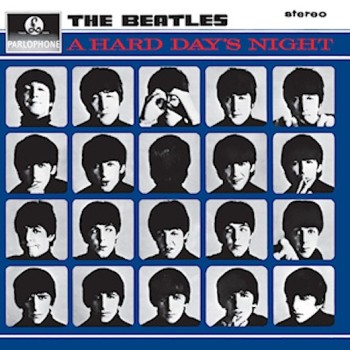 "It's been a hard day's night..."
TWAAANNGGGG!
— The very first note on the album
Advertisement:

A Hard Day's Night is the third studio album by The Beatles, released in 1964. In the US, the album was released with a different track-listing as the soundtrack to A Hard Day's Night. Noteworthy for being the first Beatles album to feature all-original material, it is the only album the Beatles ever made that was solely written by Lennon-McCartney. The other early albums all had cover songs, and the later albums all had at least one George Harrison tune. It is also dominated by Lennon like no other Beatles record, with Lennon being the primary composer on ten of the thirteen songs. Songs like "A Hard Day's Night", "And I Love Her" and "Can't Buy Me Love" became hits, while "If I Fell" and "Things We Said Today" have become fan favorites.

I'm Happy Just To Trope With You: