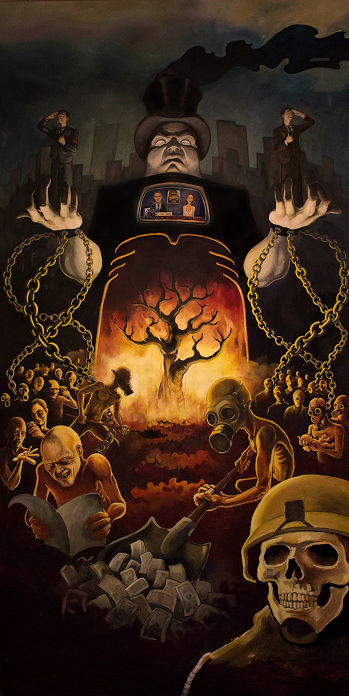 "Don't ask questions, just consume product and then get excited for next products."
"Meanwhile, Black Mirror presumably got back to the work of its horror-based arms race, as the show continues to try to find a doomsday prophecy that tech giants might still view as a warning and not a corporate benchmark for Q2 2018."
— The AV Club

on Apple's "TrueDepth" technology, similar to one of the Techno Dystopia inventions from Black Mirror: Nosedive
Advertisement:

Many people believe that greed is the root of all evil. Some individuals would take it a step further and go so far as to proclaim "Fuck the Rich!" and demand the destruction of the system that they see as being a Plutocracy

This trope can come in a variety of forms:

Unless they are socialist Utopian stories, works employing this trope will generally be on the cynical side of the Sliding Scale of Idealism Versus Cynicism and the villains will typically be categorized as Lawful Evil in Character Alignment. Anarchist works will have heroes in the Chaotic Good sphere as heroic revolutionaries while stories involving an existing socialist nation will firmly paint them as Lawful Good comrades. Though some Lighter and Softer versions of this trope may focus on certain aspects of capitalism, such as consumerism and the policy regarding regulation, rather than condemning it as a whole.

More nuanced works with this trope may also employ Humans Are Flawed or Humans Are Bastards being that, after all, businesspeople are humans too, unless they're aliens or a point is made on how the human majority is working-class and moral in the face of the rich decadent few.

Use of this trope is no guarantee that the writer understands capitalism and is willing to portray it fairly. Some works invoking this trope have come under criticism for their superficial depiction of capitalism.

Before snarking about some writers and actors employing anti-capitalist messages while profiting from them as being hypocrites, keep in mind that narrative fiction creators are more likely to identify as artists than as businesspeople. And then there's the fact that a) people need to eat and pay bills, and b) capitalism is nearly omnipresent, so working outside capitalism is virtually impossible. In the less popular Marxist sense, however, class is merely your relation to capital, so making money isn't a problem as long as you yourself are a worker and not profiting off of employees.

Sometimes represented by The Man. Compare and Contrast with Aristocrats Are Evil and Democracy Is Bad (the latter of which some believe can strengthen people's property rights, and thus enforce Capitalism, in certain situations. Others stress that capitalism is inherently undemocratic when the rich hold influence). Also keep in mind that not every work of fiction that features a Corrupt Corporate Executive is necessarily playing this trope. For example, Rufus Shinra from Final Fantasy VII and David Xanatos from Gargoyles are both unscrupulous businessmen, but the nature of capitalism is never explored in any detail and therefore those works would not count for this trope. Not to be confused with Adam Smith Hates Your Guts which is a video game mechanic.

See also Chummy Commies. For the opposite of this trope, see Dirty Communists.