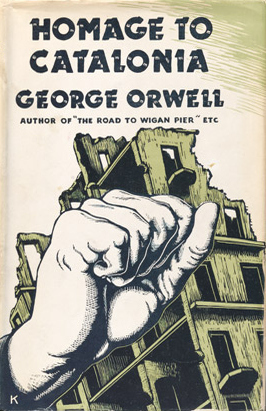 Homage to Catalonia is George Orwell's account of his experiences in the Spanish Civil War. He describes fighting as a militiaman on the side of the Republicans, as well as the gradual erosion of the Anarchist revolution in Catalonia and the power struggle between various factions on the Republican side. It may well be the most famous book about the Spanish Civil War, and is widely praised for its Brutal Honesty.
Advertisement:

The entire book can be read for free online here

. Note that two chapters that were initially published as appendices have been renumbered as chapters in this version.

Homage to Catalonia provides examples of: