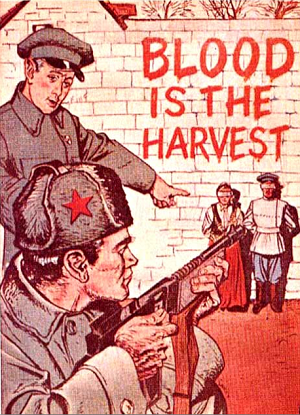 "For as soon as the distribution of labour comes into being, each man has a particular exclusive sphere of activity, which is forced upon him and from which he cannot escape. He is a hunter, a fisherman, a shepherd, or a critic and must remain so if he does not wish to lose his means of livelihood; while in communist society, where nobody has one exclusive sphere of activity but each can become accomplished in any branch he wishes, society regulates the general production and thus makes it possible for me to do one thing today and another tomorrow, to hunt in the morning, to fish in the afternoon, rear cattle in the evening, criticize after dinner, just as I have in mind, without ever becoming hunter, fisherman, shepherd or critic."
— Karl Marx, Proponent of this trope
Advertisement:

Countries, sometimes fictitious, ruled by communist regimes. As a rule of thumb, these tend to be what happens to Ruritania when People's Republic of Tyranny is installed there.

These places are often pretty depressing, dominated by dilapidated concrete architecture, people wearing drab Commie clothing and probably even the weather cold and rainy (unless it's some place like Cuba when this trope meets Banana Republic). Basic utilities are substandard, there are shortages of almost everything (but the news service is all too happy to inform you that a local foundry has just cast its 500,000th ton of raw steel) and what little consumer goods are produced are absolute rubbish, especially the cars. However, a foreigner will be glad to find out his spare change is quite a sum in local currency. Locals, besides the clothing, tend to be The Eeyore or Apathetic Citizens, with possibly the only exception being Gallows Humour (often of Russian Reversal variety). Which means it's no wonder they tend to be very keen on alcohol. There's no free speech, either. On the up side, there's always someone caring for you, and frequent public festivities. You can also expect secret weapons facilities (especially in the biological field of WMD). And it's the place where the Defector from Commie Land comes from.

In Eastern Bloc portrayals during the Cold War, Commie Lands will undoubtedly be portrayed as flawless, considering that media workers in the nation could easily get in trouble for creating anything that resembled dissent. Post-Cold War, the ex-Eastern Bloc countries will portray their former regimes as heartless dictatorships, or if Why We Are Bummed Communism Fell is in effect, regimes that had a good idea but squandered bringing it into fruition— Good Bye, Lenin! is a great example of this kind of portrayal.

Since the USSR was the one calling the shots, for the most part, it tends to be the default Commie Land, while East Germany also gets a lot of portrayal for being a hotbed of spy activity (and in media tends to avoid the error that Communism = Russians). The other "middle" Eastern Bloc countries may come about when trying to depict a pretty poor and depressing place for the protagonist to infiltrate (with varying accuracy, considering that some of these non-major Eastern Bloc countries, such as Czechoslovakia and Hungary, had a relatively less oppressive government and high living standards). Those in the mood for making a war film will use Vietnam, a tropical Commie Land where guerillas wait in the jungle, eager to ambush American soldiers.

As of now, China and North Korea are probably the go-to examples for this trope, although China's economy has reformed greatly since the end of the Cold War. See Red China for more details.

After Cold War, Commieland usually returns to its Ruritanian heritage (Countrystani in the case of Central Asia), essentially mixing the worst aspects of the old and the new and becoming a place of rampant crime and predatory capitalism (see media portrayals of The New Russia).

The nicer, more-lighthearted versions will instead be populated by Chummy Commies and may have a Post-Scarcity Economy, where capitalism, instead of being violently overthrown, has become obsolete.

A subtrope of The Dictatorship. Compare and contrast Privately Owned Society (the ideological opposite), Alternate-History Nazi Victory (the Axis counterpart), Eagleland, Ruritania and Banana Republic.