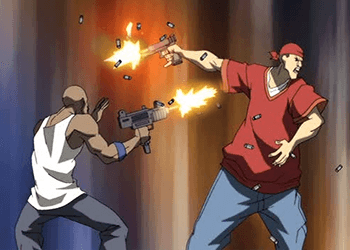 Here, Uzi how not to use firearms.
"The great thing about Jeremy's shooting is that you are perfectly safe just as long as you stand right in front of the target."
— James May, Top Gear
Advertisement:

More Dakka is claimed by many to be the most reliable way of killing something, but strangely there are a lot of shootouts on TV where the number of bullets fired seems inversely proportional to their likelihood of killing or even wounding anyone. Heroes and villains can expend enormous amounts of ammo shooting at each other, often with automatic weapons and/or at very close range, yet everybody important is protected by Plot Armor. Only a mook or a Red Shirt has anything to worry about, and sometimes even they will be defeated or driven off non-lethally. It's not that the bullets aren't potentially lethal, but everyone's accuracy is so horrible that they seem to hit everything except their foe, even in situations where they have a clear line of fire and you'd think it would be almost impossible to miss. When the fight's over, all the property and vehicles in the area will be chewed up with bullet holes, yet there will be no perforated corpses to match. This trope differs from Imperial Stormtrooper Marksmanship Academy in that instead of just the bad guy's mooks being unable to hit the hero as he slaughters them with his own Improbable Aiming Skills, A-Team Firing makes everybody on both sides keep missing.

Perhaps this trope is employed as an alternative to the opposite extreme of Guns Are Worthless and Annoying Arrows. A writer trying to be realistic about how dangerous both arrows and bullets are in the right hands would have to make the people firing them unable to hit the broad side of a barn in order to draw fights out for dramatic effect. In the case of the Trope Namer, however, the real reason was that The A-Team was nominally a kid's show in prime time, and killing was a network no-no; it was overlooked at the time due to the Rule of Cool, and in fact, the movie remake was heavily criticized by fans for actually showing the heroes killing people. This trope can be related to instances where the goodies deliberately miss their shots because they do not wish to kill anyone, but ironically the intentionally non-lethal use of firearms tends to require the opposite trope — Improbable Aiming Skills — for tricks like Blasting It Out of Their Hands or winging the bad guys in order to invoke Only a Flesh Wound. Most of the time, A-Team firing is depicted as unintentional.

This trope is often Truth in Television. Any sustained automatic fire from a handheld weapon will require divine intervention to actually hit its target because the recoil from each successive shot will force the weapon's muzzle to rise up

until all of the rounds are passing harmlessly over it. That's why reckless automatic fire is nicknamed "spray and pray

". As for non-automatic weapons, handguns are known for only having an effective range of about 30 feet for most non-professional users, since they have a shorter sight radius to aim with, as well as less weight and fewer anchor points (i.e. buttstock and foregrip) to help control recoil. So under most conditions, this trope could be interpreted not as "all shots have bad luck" but as "no shot gets better than average results (i.e. a miss) no matter how many shots are fired."

In past centuries of gunpowder warfare, firearms technology and the quality of training put considerable limits on accuracy. In the old days, every soldier's weapon was muzzle-loaded and single shot. Barrel rifling and tight-fitting lead ball ammunition made a gun more accurate, but they also made it slower and more difficult to reload as powder residue fouled the barrel more with each shot. Since the steps of reloading took a long time to begin with, making it even slower was a big disadvantage while under fire. Therefore, most regular infantry used smoothbore muskets while rifles were more often limited to hunters, sharpshooters, and skirmishers. It was also easier to reload a musket quickly using under-size balls, even though the loose fit and random spin imparted to the bullet tended to send it off target upon leaving the barrel. Admittedly, even an unrifled musket in competent hands could be used to hit an individual 100 yards away, but the average recruit's target-hitting ability was very poor, and most armies didn't want to spend large amounts of expensive powder and ammunition by giving everyone extensive target practice.

Especially in the 18th century, military leaders believed that collective volume of fire was more important than individual accuracy for inflicting casualties. To achieve this they trained their troops to load and fire as rapidly as possible in volleys, directing their fire at the whole enemy formation rather than picking individual targets. Even if most of the bullets in a given volley missed the enemy, sheer numbers would ensure that some would hit, and rapid firing would make that damage keep adding up. What's more, the shooting was often merely intended to soften up the enemy before a decisive bayonet charge. The ability to pick off individuals at range was of limited use in a massed battle anyway, because black powder guns produced huge amounts of smoke: the battlefield would be shrouded in an impenetrable fog after a few volleys, rendering one's aiming skills rather moot.

The effect of firearms with higher potential accuracy and rate of fire has been to change tactics, ironically leading to similarly low rates of accuracy for different reasons. Targets that move quickly and stay behind cover instead of lining up in the open are naturally harder to hit, and when they are returning fire one's own ability to concentrate, aim and shoot will be seriously impacted. Furthermore, a lot of bullets are fired for reasons other than directly killing the enemy. Modern small arms tactics revolve around suppressive fire

and maneuver, in which one part of a military force puts out sustained fire towards the enemy not so much to inflict casualties as to pin them down behind cover and restrict their ability to move or fire back. While the enemy is being suppressed, other elements can maneuver in close and go for the kill. Another ammo-intensive technique is Reconnaissance by Fire, in which a force that doesn’t know exactly where the enemy is hiding will shoot preemptively at potential enemy hiding places to cover their advance. The amount of ammo used in warfare today is staggering. Although ammo expenditure and enemy kill figures are notoriously unreliable, John Pike of GlobalSecurity.org estimated

that U.S. forces fired something like 250,000 bullets (including large numbers fired in practice) for each enemy combatant killed between 2002 and 2005.

The opposite of this trope is Improbable Aiming Skills, and the bladed weapon counterpart is Flynning, in which swords clash but nobody goes for the kill. See also Bloodless Carnage and Non-Lethal Warfare, which often motivate this trope. Compare Powerful, but Inaccurate, when the inaccuracy is canonically a property of the weapon.

Harry empties an entire cylinder without hitting anything.

Harry empties an entire cylinder without hitting anything.