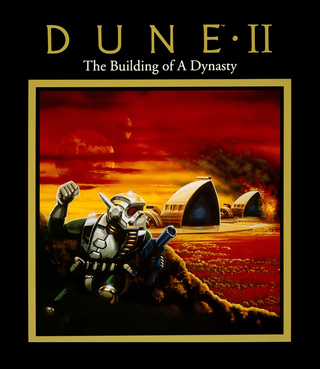 Developed by Westwood Studios and released in 1992, Dune II: The Building of a Dynasty is the Trope Codifier for the Real-Time Strategy genre, as well as the Trope Maker for numerous gameplay conventions.

The games featured three playable factions: House Atreides, House Harkonnen and House Ordos. In Dune II, as well as its remake Dune 2000, the player would be given a map of Arrakis that represented the territories of the three factions. The player, no matter which side he picked, would then play through a variety of missions (In Dune II, either harvesting spice or destroying the enemy base and all their units) and could see their progress on the map. Once they'd conquered pretty much the entire map, the two enemy factions would join each other, as well as the Padishah Emperor of the Known Universe, Shaddam IV of House Corrino and his Imperial Sardaukar, to fight off the much too powerful player faction. Once the player had won the entire game, he would be treated to a cinematic of whatever faction he's playing bringing their own form of justice to the Emperor for having tried to use them in his elaborate plan.

The game was ported over to the Sega Genesis in 1993 under the title Dune: The Battle For Arrakis.

Dune 2000, a remake released in 1998, took advantage of the numerous advancements made to the RTS genre within the previous six years (you could now control multiple units at once, use the right and middle mouse buttons for easier movement, etc.), and replaced the drawn cutscenes of the original with Westwood Studios' near-trademark Live Action Cutscenes. It also featured slightly more tactical objectives (Rather than "Kill the Harkonnen" you get to "Protect the Fremen from the Harkonnen" then "kill the Harkonnen") and Frank Klepacki (you may have heard of him), one of the original composers for Dune II, returns to score the new music and remix some of the old ones. While the game received mostly lackluster reviews upon release and sold rather poorly compared to other Westwood games, it has since developed a bit of a cult following for being a mostly faithful remake of the original with a number of post-C&C gameplay improvements and far better presentation.

It was followed by a true sequel, Emperor: Battle for Dune, in 2001.

The Dune games featured Geo Effects quite early in the history of Real-Time Strategy. Buildings could only be built on rock, and there were limited rock available, meaning that players had limited base-building opportunities. Further, infantry could be positioned on mountains to protect them from being run over by tanks, and vehicles would move much slower over dunes than just desert plains. And, lest we forget, this is Dune we're talking about here - rock is also a safe haven from the Shai-Hulud.

Very loosely inspired by the Dune books, of course. The first Dune game was an Adventure Game with RTS elements that followed the plot of the 1984 film, and was actually developed at the same time as Dune II, making it largely a sequel In Name Only (only titled as such because both were published by the same company and Cryo Interactive's game came out first), retaining the basic setting elements but presenting a new story about war and political control distinct from the novels. The game engine for Dune II would later be refined and used for a game set in an original universe - Command & Conquer.

Alternative Title(s): Dune 2000, Dune II The Building Of A Dynasty, Dune The Battle For Arrakis