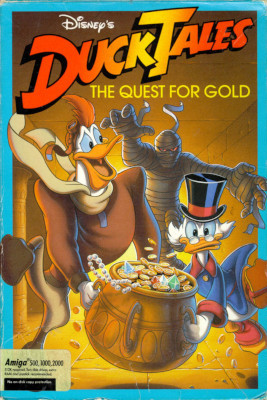 DuckTales: The Quest for Gold is a Licensed Game based on the DuckTales (1987) show developed by Incredible Technologies and released for the Amiga, Apple ][, Atari ST, Commodore 64, and IBM Personal Computer in 1990. It puts the player in the role of Scrooge McDuck who has been challenged by Flintheart Glomgold to earn more money than him within 30 days, to prove who's the richest duck in the world and deserves a place on the Dime magazine's cover.

The game has you select the location you want to travel to, which is then done in Launchpad McQuacks plane. After it's done, you play one of several minigames and attempt to win them to find treasures located in the area. This gameplay loop is done for the rest of the game.