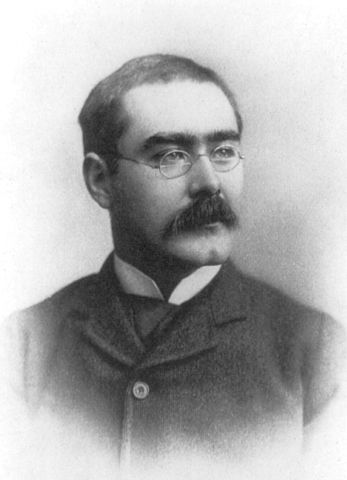 "If you can talk with crowds and keep your virtue
Or walk with kings, nor lose the common touch
If neither foes nor loving friends can hurt you
If all men count with you, but none too much
If you can fill the unforgiving minute
With sixty seconds worth of distance run
Yours is the Earth, and everything that's in it
And, which is more, you'll be a man, my son."
—If...
Advertisement:

Joseph Rudyard Kipling (30 December 1865 – 18 January 1936) was an English writer and Nobel prize winner, born in Bombay, India, during The Raj.

Many of Kipling's works, including The Jungle Book, are set in British India, and popularised most of the associated tropes. His other works include some early Science Fiction, while his literary style, particularly indirect exposition, was a significant influence on Campbell, Bertolt Brecht and Robert A. Heinlein. He was a favourite of Henry James, T. S. Eliot, Jorge Luis Borges, Neil Gaiman and others. Even Salman Rushdie while disagreeing entirely with his politics, his viewpoints, and values, agrees that Kipling's work, biased as it is, does capture a sense of an authentic India, which despite his imperial viewpoint, he did get right to an extent.

And what is more, Kipling was an innovator in the short story form, a prolific author of many stories and tales, and avoiding Sturgeon's Law for a good number of them. In Pop-Cultural Osmosis, Kipling is best known as the creator of Mowgli, star of The Jungle Book, popularized and immortalized by its cartoon and live-action adaptations.

He lost a son in World War I and was responsible for choosing two of the common phrases associated with Remembrance in the UK: "Their Name Liveth For Evermore" and "Known Unto God" (on the graves of Unknown Soldiers). And... referred to it in Double Entendre of all ways:

If any question why we died,
Tell them, because our fathers lied.
— Epitaphs of the War, "Common Form"

Although this should not be taken, as it has in recent years that Kipling in any way opposed the war, or that he was anti-war. Kipling supported British entry into World War I, wrote propaganda on its behalf, and after the war fully supported the Treaty of Versailles, and vehemently criticizing the British Parliament for not supporting France's position in more strictly enforcing the conditions of the treaty. Kipling grieved like any father did, but he never regretted Britain's participation in the war, nor did he repudiate its role and function as The Empire. Indeed he felt that the British Empire, in alliance with France and America was more essential than ever with the rise of Bolshevism and Nazism. He believed in Conspiracy Theory false allegations that the Labour party was a Communist front (it wasn't) but he also opposed Oswald Moseley and Nazism.

Poems from Kipling, sometimes set to music, are popular references in any military fiction or Sci-Fi; the fans of the latter have a tradition of using Kipling's poems as 'Found Filk', especially Leslie Fish and Joe Bethancourt, who released an album (Our Fathers of Old) of Kipling derived or influenced songs.

His relationship with his son Jack and his death during World War I was dramatized into a play and later a TV movie, appropriately titled My Boy Jack staring David Haig as Kipling, Daniel Radcliffe as Jack, Kim Cattrall as Kipling's wife Caroline, and a pre-fame Carey Mulligan as Kipling's daughter Elsie.

Kipling's works with their own trope pages include:

Other works by Kipling provide examples of: