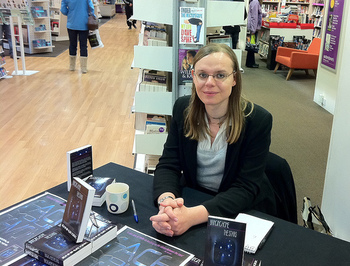 Jennifer Kirk is the writer of several science fiction and fantasy novels; including her best known novel, Bringing Home the Stars. Her stories often deal with ideas of corporate control of the masses, gender identity, and personal isolation. In addition, she co-writes two webcomics, The Life of Nob T. Mouse and All Over The House while also working as a local radio broadcaster.

and blogs a lot.