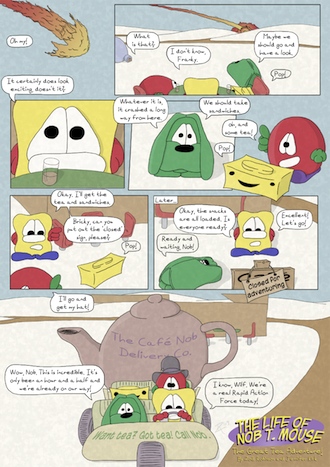 Would you leave the fate of the universe up to these wallies?
"Oh my!"
— Nob T. Mouse, all the time
Advertisement:

The Life of Nob T. Mouse

is a surrealist science-fantasy comedy webcomic. Created in 1996, it is the oldest British web comic and, according to research by The Webcomics Company podcast, either the 16th or 17th webcomic ever created.

The strip began as a series of hand-drawn and hand-lettered comics, coloured in coloured pencils and updated intermittently before the creator, Zoe Kirk-Robinson took an eight-year (unannounced) hiatus. She picked up where she left off in the middle of 2007 and began co-writing the strip with her partner, Jennifer Kirk, in 2008. This has the odd effect of making it one of the oldest continuing webcomics, but not one of the longest-running.

The premise of the comic is to subvert the standard view of reality and make a joke while doing so. Plot points range from the totally random to discussions on how a child might explain the world if she had overheard half a physics lecture, missed the point and then tried to explain it to someone else, who wrote it down.

While clearly influenced by the dadaist and surrealist movements, the artistic style also mimics children's pictures by ignoring perspective to a great extent, using primary colours and containing an army of characters that are, effectively, splats of colour with feet.

The comic was originally the sole purview of one writer-artist, Zoe Robinson, but now the writing duties are shared between Robinson and her partner, Jennifer Kirk, while Robinson continues to produce the artwork on her own.