Webcomic / Maddie On The Island Hue 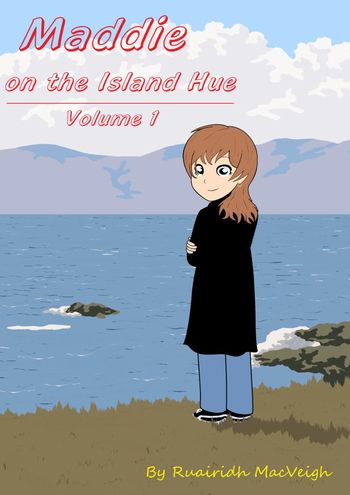 Why would anyone live here?
Maddie On The Island Hue was a Slice of Life webcomic by British transportation artist Ruairidh MacVeigh. Set in the summer of 1985 the story follows 17-year-old Madison "Maddie" Stephanie Grey, an upper class girl from Plymouth in Devon who moves with her parents to the remote Scottish island of Hue in the Outer Hebrides due to her marine biologist father getting a job there. Although she initially finds it hard to adjust to living on an island of only 14 people where she lacks most of her high class luxuries (as well as experiencing some oddities like an outdoor shower), Maddie soon befriends some of the island's younger residents: Siobhan Pattinson, a nervous but well meaning girl who sold her their new house on the island (due to being the daughter of Hue's housing agent), Andy Taylor, the island's wild mechanic who lives next door to Maddie, Ebony Larsson, an upbeat sheep farmer and an open lesbian, and Matthew "Matt" O'Rourke, the son of the island's priest, and Andy's best friend. After Matt departs for a while due to his parents living in different places, he later returns to the island joined by his girlfriend Rhia from Ireland. Maddie often finds herself going to great lengths to solve her friends' personal problems.
Advertisement:

The series is a fair mix of comedy and drama. Most of the funny moments comes from Maddie's experiences adjusting to life on the island and playing off of her friends, and a lot of the drama comes from her friend's backstories.

This comic has now been deleted.

Upon the conclusion of the comic's original run in late 2016, a sequel Maddie In America was released, followed by a spin-off starring Siobhan and Ebony named Outsiders; which was released in December 2017.