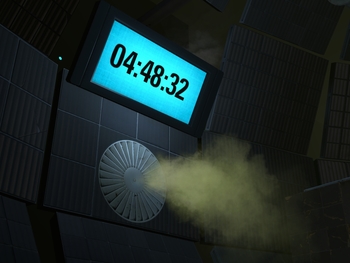 "Neurotoxin level at capacity in five minutes."
"You know what I hate? When you're at the doctor's office and he says, 'You have exactly ten minutes to live.'"
— Slowbeef of Retsupurae on Arise 3
Advertisement:

Whenever a technological device is about to fail, the Magical Computer knows exactly how long it will take to fail and displays a timer counting down (often with the use of a Viewer-Friendly Interface). Very useful to create a suspenseful situation, in a similar manner to a Time Bomb.

Naturally, there will be no lasting consequences if the failure is stopped in time, even if there's just a millisecond left. Sometimes, the timer is polite enough to wait for the dramatic scene to finish, in which case it's a Magic Countdown. In Video Games, these are very handy for setting up Timed Missions. Related to Ludicrous Precision. See also Race Against the Clock.

Justified in the case of an actual Time Bomb, since defusing it half a second before it would've exploded has the same result as defusing it 5 hours earlier. In just about any other case? Not so much.